SOPHIA ANTIPOLIS, France – May 19, 2022 | Climate change and its causes and consequences are notions now widely accepted throughout the world. In 2021, carbon dioxide (CO2) gas emissions – one of the most pollutant greenhouse gases involved in global warming – exceeded 36 gigatons, and transportation is responsible for about one quarter of these emissions. To mitigate the effects of human activity on the environment, this sector, and especially road transportation, has to evolve and offer more sober-minded solutions than fossil fuel-based internal combustion engine vehicles.

To address this challenge, several countries such as South Korea, India, Japan, Canada, France and the UK, and numerous companies including Volvo, Ford, General Motors, Mercedes, BYD and Tata Motors, have announced plans to phase out fossil fuel vehicles in the future, through released pledges and agreements.

In this situation, the electrification of mobility seems to be an encouraging alternative. Therefore, battery-powered electric vehicles have experienced soaring interest over the past two decades. However, some issues, such as mileage autonomy, charging time, battery recycling or raw material supply, are still considered as barriers to the complete adoption of these types of vehicles. These issues can be avoided with the use of fuel-cell vehicles, which seem to be solid candidates to play an important role in the transformation of the automobile sector. In fact, a real buzz of activity can be observed recently, with the structure of the domain taking shape – for example, solutions for optimizing the hydrogen fuel cell for series production readiness, joint ventures (JV) and partnership agreements between companies and particularly vehicle manufacturers – and several commercially available car models being unveiled, such as the Toyota Mirai, the Honda Clarity, and Hyundai’s ix35 and Nexo.

The developments in inventive R&D activity in this sector can be assessed by analyzing Intellectual Property (IP) – especially patents – related to these technologies. Indeed, patent landscape analysis is a powerful tool for identifying historical and emerging players in given industries, while providing a better understanding of their expertise and know-how in a specific technology. Overall, the patenting activity (patent filings) reflects the level of R&D investment made by a country or player in a specific technology, while providing clues as to the technology readiness level reached by the main IP players. What’s more, the technology coverage along the value chain and geographical coverage of the patent portfolios are closely related to the business strategy of IP players.

As such, Knowmade has applied patent landscape analysis to hydrogen-based fuel cell electric vehicles (FCEV). The patent corpus includes more than 30,000 patent families (inventions) published over the past two decades, with about 5,000 in the last two years alone. Germany is a prominent country in the landscape, from production sites to market development and patenting activity.

Firstly, Germany is the leading European country in terms of priority patent applications, with more than 2,300 filings, and the fifth country worldwide, behind the historical giant Japan, the new juggernaut China, South Korea and USA. Moreover, the temporal dynamics of German patent filings show a compound annual growth rate (CAGR) reaching 12% per year since 2016. Among the German companies with inventive activity in hydrogen fuel cells are car manufacturers and OEM tier 1 suppliers, such as Daimler and its affiliate Mercedes-Benz Fuel Cell (formerly Nucellsys); Volkswagen/Audi and their affiliates; Bosch; BMW; Cellcentric (joint venture between Daimler Truck and the Volvo Group, founded in 2021); and Siemens, to name a few. Some German pure-play fuel cell companies can also be observed in the patent landscape, such as Sunfire and its acquisition Emitec, and Proton Motor Fuel Cell.

Moreover, Germany is the leading European country in terms of volume of patent publications with more than 4,500 documents, and the fourth country worldwide, surpassed only by Japan, China and USA, meaning that foreign companies have the will to protect their innovative advancements in this attractive production and market territory. Among the main contributors to this ranking from outside of Germany are US vehicle manufacturers General Motors and Ford (although both less active in the past few years), and Asian car makers such as Toyota Group and its affiliates (Toyota Motor, Denso, Aisin Seiki, etc.), Hyundai/Kia, Honda and Nissan. The presence of Canadian fuel cell pure player Ballard Group is also of note.

Figure 2: Overview of German patent publications and their non-German applicants.

Furthermore, it is noteworthy that all these car makers and equipment suppliers both German and foreign are less interested in developing fuel cell components – as the different fuel cell technologies, though still benefiting from innovative activity in new materials for catalysts or electrolytes for example, are quite mature products – and more focused on integration in vehicles and the control and management of operating parameters for a running fuel cell: temperature, pressure, electric variables, failure detection, etc. – i.e. those parts of the fuel cell supply chain that are more aligned with their core activities. 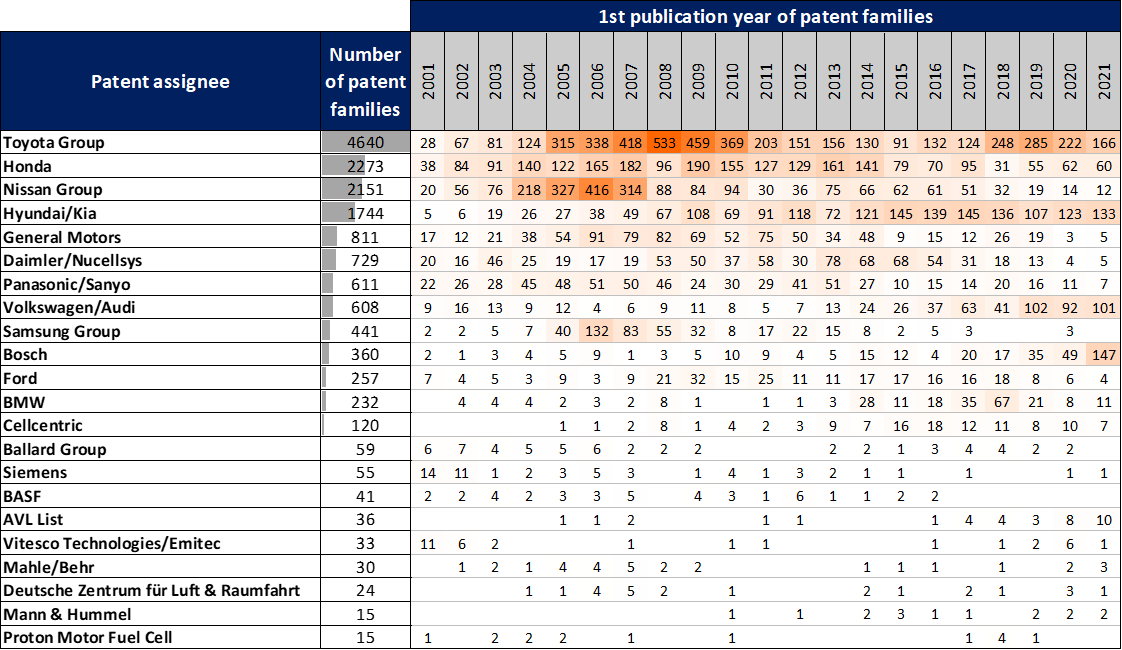 When focusing on the temporal evolution of global hydrogen fuel cell-related patenting activity among the main players over the last two decades, some companies have maintained a steady interest throughout the years, such as Toyota, Hyundai/Kia and Daimler, along with its JV Cellcentric. Furthermore, several players have shown a growing interest in the field these past few years, including Volkswagen/Audi, Bosch, BMW and the Austrian OEM AVL List, upholding the global trends in German expansion.

Otherwise, among all existing fuel cell technologies, it seems that Proton-Exchange Membrane Fuel Cells (PEMFC) are still the most used and most suitable when it comes to electric vehicles, as patents related to PEMFC represent about 25% of the patent corpus analyzed by Knowmade. Toyota, which is leading the hydrogen fuel cell patent landscape (figure 3), has been overtaken by its challengers Honda and Nissan in PEMFC patenting activity, both in number of inventions and in ratio, as they respectively dedicated 32% and 25% of their patent portfolios to this type of fuel cell (only 9% for Toyota). Hyundai/Kia is not left out either, with 20% of its fuel cell patent portfolio relating to PEMFC technologies.

Patenting activity related to hydrogen fuel cells for electric vehicles is very much thriving, and attractive at every level of the supply chain, especially on hot topics such as fuel cell operation management and control of running parameters. In such a highly competitive and dynamic environment, it becomes increasingly critical to have good knowledge of the patent landscape and understand the strategy of the different players. As such, Knowmade’s analysts are working on a new report which will be published shortly, in order to analyze the competitors’ R&D and IP strategies, to reveal where industry leaders, newcomers and start-ups are focused, and give an early view into the strategies they are pursuing, technologies they are investing in and products they are building.