SOPHIA ANTIPOLIS, France – February 01, 2018 │ This year again, the Las Vegas Consumer Electronics Show, 2018 edition allowed us to discover the latest innovations in numerous fields including the microLED displays sector. “The Wall”, a 146” microLED TV powered by Samsung, has been probably the most impressive announcement. The Korea-based LED maker Lumens also proposed a 139” display, with smaller 0.8 mm pitch. In both cases, technology developed by these leaders is not strictly microLED related but confirms the attractiveness of microLEDs solutions. Yole Développement’s (Yole) analyst, Dr. Eric Virey attended the show and proposed a snapshot on i-micronews.com.

“Initial success in smartwatches could accelerate technology and supply chain maturation, making microLED competitive against OLED in high end TVs, tablets and laptops”, explains Dr. Eric Virey from Yole. “In Yole’s most optimistic scenario, the market for microLED displays could reach up to 330 million units by 2025 (1) .”

The microLED display sector has been deeply analyzed by Yole and KnowMade, both parts of Yole Group of Companies. The partners propose today a detailed patent analysis titled: Microled Displays: Intellectual Property Landscape. Under this new report, they identified key patents, technology nodes and players related to microLED technologies for display applications. This latest analysis confirms the growing interest around the microLED technologies.
Which companies own the patents? What are their major thrust areas and portfolio strength? Yole Group of Companies invites you to discover the latest insights of this dynamic industry.

Yole Group of Companies confirms the buzz: as of today close to 1,500 patents relevant to the microLED display field have been filed by 125 companies and organizations. Among these are multiple startups, display makers, OEMs , semiconductor companies, LED makers, and research institutions.

“The overall corpus is relatively young, with an average age of 3.2 years across all families”, asserts Dr. Nicolas Baron, CEO & Founder, KnowMade. The first patents were filed in 2000 – 2001, but the bulk of the activity started after 2012. Thus, only a minority of patents have been granted so far.

Pioneers include Sony, Sharp, MIT, and others, although the bulk of the initial developments were conducted by a variety of research institutions including Kansas State University, University of Hong Kong, Strathclyde University & Tyndall Institute (which spun-off mLED, InfiniLED, and X-Celeprint), University of Illinois, and startup companies like Luxvue and, later on, Playnitride and Mikro Mesa.

Yole Group of Companies’ study also reveals a number of companies that have not yet been identified as players in the microLED display field. Moreover, this study confirms the commitment of many more companies, which are not typically associated with display technology. Intel and Goertek are part of them. On the flip side, various companies known to be active in the field (i.e. Huawei) have yet to see any of their patent in the field published. 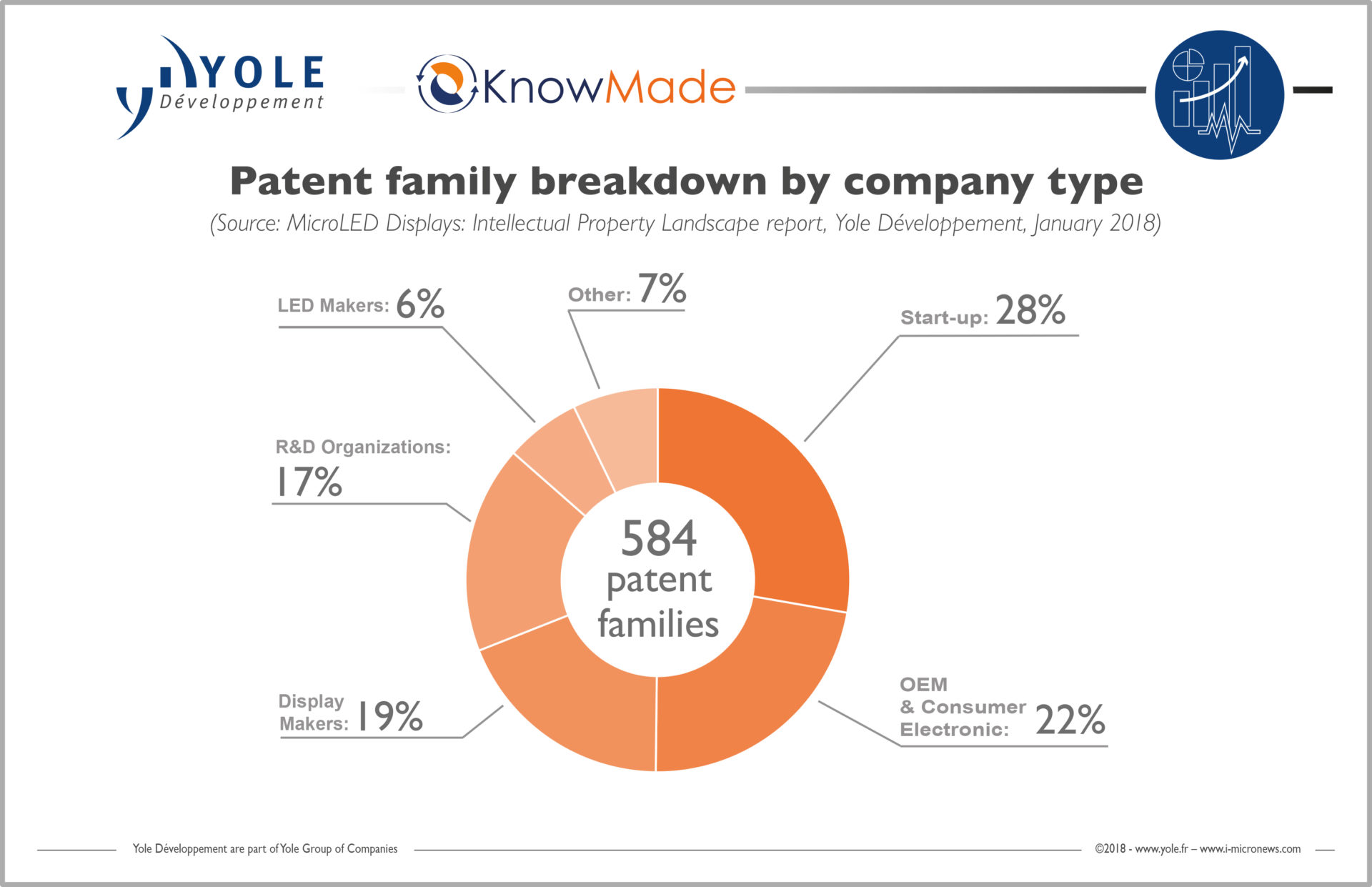 Overall, the activity is still led mostly by startups (including those such as Luxvue or eLux) acquired by larger organization) and research institutions. With the exception of Sharp and Sony, display makers and LED makers are relative latecomers. Many companies started ramping up their microLED research and development activities after Apple showed faith in microLED with its acquisition of Luxvue. As of December 2017, Apple appears to have the most complete IP portfolio, covering almost all key technology nodes. However, many of its patents pertain to the technological ecosystem developed around the company’s MEMS transfer technology. Other companies like Sony, with a smaller portfolio but which had a head start, might own more fundamental design patents with strong blocking power.

“The supply chain is complex and lengthy compared to typical displays,” comments Dr. Eric Virey from Yole. “Every process is critical and it’s a challenge to effectively manage every aspect. No one company appears positioned to master and execute across a supply chain that will likely be more horizontal, compared to other established display technologies.”

The IP landscape reflects these challenges through the variety of players involved, but requirements differ from one application to another. For low-volume, high added-value applications like microdisplays for augmented/mixed reality for the enterprise, military, and medical markets, one can envision a well-funded startup with good technology efficiently managing the supply chain. However, consumer applications such as TVs and smartphones will require significant investments to unlock large scale manufacturing. 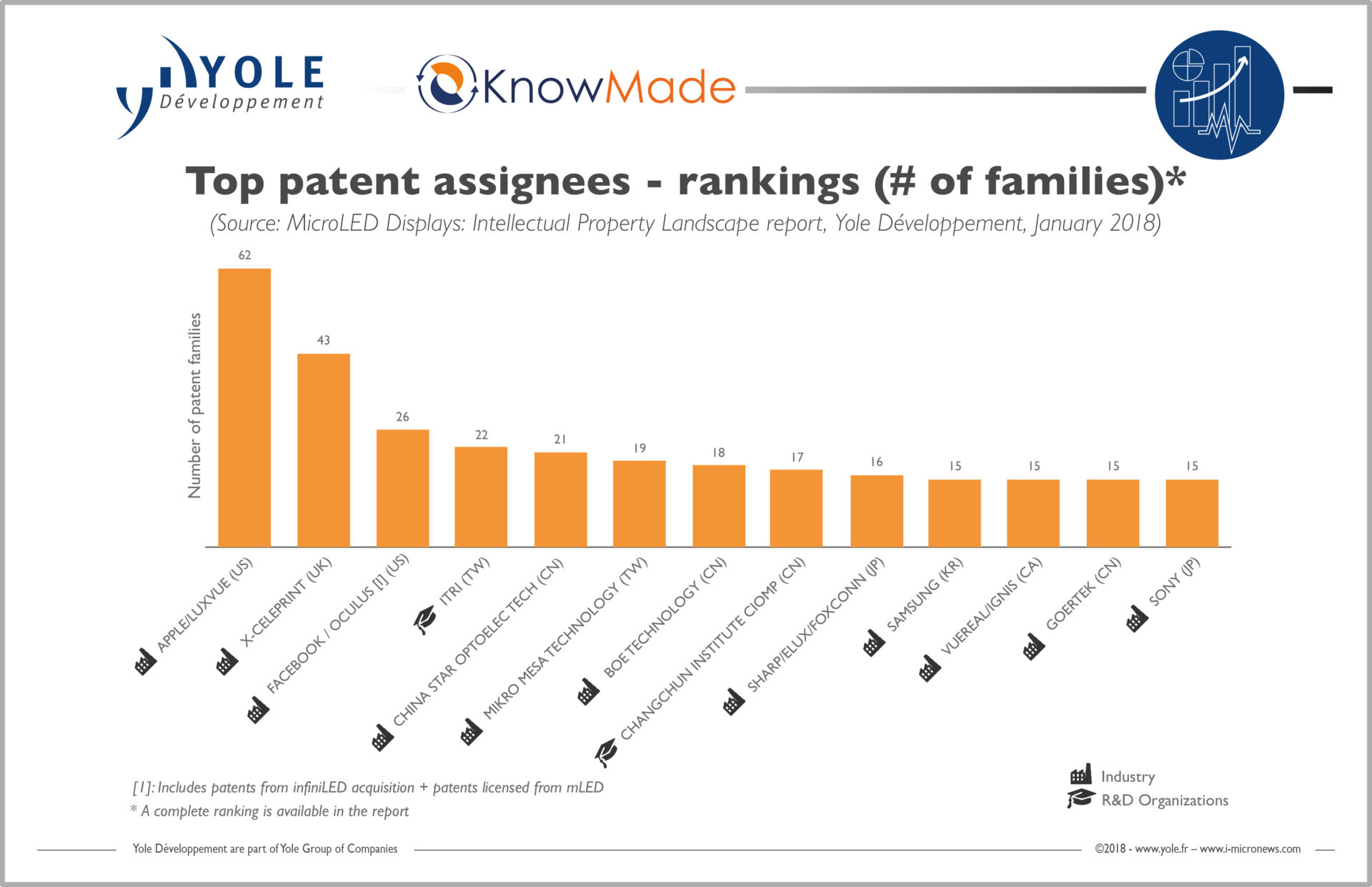 Though only a few companies have a broad IP portfolio covering all major technology nodes (transfer chip structure, display architecture, etc.), enough players have patents across many technology bricks to guarantee that complex licensing and legal battles will arise once microLED displays enter volume manufacturing and reach the market. Small companies with strong positions in various technology bricks will attempt to obtain licensing fees from larger players involved in manufacturing. Large corporations will try to block each other and prevent their competitors from entering the market. To prepare for such events, some latecomers appear to be filing large quantities of patents, sometimes with little substance.

Find all our reports about photonics, lighting or display technologies.