SOPHIA ANTIPOLIS, France – June 10, 2022 | In April 2022, Volvo announced a key investment in the Israeli start-up StoreDot founded in 2012 (see press release). This collaboration aims to strengthen Volvo’s position on promising fast-charging battery cell technologies. Volvo owns more than 400 patented inventions related to batteries, all of them being related to battery packs and battery management systems (BMS). For several years, Volvo has been securing its position on battery cells by means of long-term supply agreements with LG Chem and CATL,  and more recently by establishing a joint venture with Northvolt to develop and produce more sustainable batteries to power the next generation of Volvo and Polestar electric vehicles (see press release). In parallel, Volvo joined the American start-up Redwood Materials, founded in 2017 by a former Tesla CTO, and Ford, to launch a free electric vehicle (EV) battery recycling program in California.

Prior to Volvo, StoreDot already collected investments from Daimler, Vinfast, Ola Electric, BP Ventures, Samsung, TDK, EVE Energy and Yozma Group. In November 2021, the company also announced a partnership with Group14 Technologies on lithium-silicon anode materials (see press release). StoreDot develops an extreme fast-charging battery based on the design and synthesis of both organic and inorganic compounds. In 2019, the company achieved a world first by demonstrating the live full charge of a two-wheeled EV in just five minutes. In 2020, the company demonstrated the scalability of its XFC batteries and is on target for EV battery production at scale by 2024.

Fast-charging batteries are very attractive for car manufacturers to convince people who are reluctant to buy an electric vehicle due to their lack of autonomy for long drives. However, high currents used during fast charging accelerate the degradation of battery performances, lifetime and safety. That’s why specific developments must be made to improve fast charging performances. On its website, StoreDot reveals the use of bio-inspired nano-sized silicon anode materials synthesized with proprietary small-molecule organic compounds and solid-liquid electrolyte in their battery cells. “The analysis of StoreDot’s patent portfolio helps us better understand the technology behind their promising fast-charging battery cell performances”, says Dr Fleur Thissandier, PhD, Technology and Patent Analyst Battery & Materials at Knowmade.

StoreDot’s patent portfolio reveals their key developments for each component to achieve a fast-charging battery with good energy and power performances, lifetime and safety.

Inside the patents: StoreDot’s technology successes for a fast-charging battery

At anode material level, StoreDot has filed patents several silicon-based anode material compositions which enable them to improve energy, power and fast-charging performances and extend cycle lifetime, i.e. silicon nanoparticles coated with nano silver and/or tin (US11196039, US11276850, US20210210754), metalloid oxide/salts and carbon nanoparticles (US20200343543), ionic-conducting electrically insulating polymer together with carbon nanofibers (CNFs) or nanotubes (CNTs) (US10468727, US10454101), carbon/transition metal oxide and B4C or boron oxide nanoparticles (US10923712, US10199646).

Figure 2: Core-shell silicon anode nanoparticle developed by StoreDot according to patent US10199646.

StoreDot’s patents reveal the role of these coatings in performance improvements. Passivation coatings with silver/tin or metalloid oxide/salts and carbon nanoparticles increase the anode conductivity, and prevent oxidation in the water-based slurry. Polymer/CNT/CNF coating allows the core expansion upon lithiation, i.e. improving mechanical robustness and facilitating the movement of lithium ions, i.e. ionic conductivity. The connection between silicon material and polymer shell with carbon fibers or CNTs forms a network throughout the anode material and interconnects the cores to enhance the electrical conductivity of the anode. This coating results in a fast-charging rate with enhanced safety. In fact, the coating creates buffering zones which gradually introduce lithium ions into the lithiation and thus prevent lithium-ion accumulation at the anode/electrolyte interface and consequent metallization and dendrite growth and related risks of fires or explosion. Coating with carbon or transition material oxide and boron carbide/oxide enhances mechanical stability thanks to the incorporation of tungsten and/or boron into the expanding silicon-lithium alloy during the charge-discharge process. This prevents metallization of the lithium during charging due to relatively strong lithium-tungsten and/or lithium-boron binding. Boron carbide also enhances the binding energy of lithium atoms and prevents lithium from clustering at high lithium doping concentrations.

At anode level, StoreDot’s patent applications disclose several ways to improve the stability and lifetime of fast-charging batteries. The addition of an ion-conductive coating on the anode layer made by means of in-situ polymerization facilitates Li-ion transfer through the coating while preventing electrolyte decomposition on the anode surface (US20210013494). The use of lithium poly(acrylic acid) binders improves silicon anode uniformity and mechanical stability during cycling (US20200255557). Silicon anode active material can be embedded in an electrically conductive metallic structure which provides electric conductivity, a large volume supporting good ionic conductivity and may enable the reduction of binders, conductive additives and/or current collectors to result in high structural stability, lower resistance and higher energy density and lifetime (US10581065, US9406927, US10862104). Silicon particles can be deoxidized prior to the preparation of anode slurry and its coating on the current collector (US9406927). StoreDot also discloses in its patent applications other anode active materials such as LixAly alloys (US10312504) and Germanium (US9406927).

StoreDot holds only one patent focused on cathodes (US9831488). This patent discloses a cathode manufacturing process compatible with high charging rates and industrial production. The cathode comprises cathode active material (LFP, NMC, NCA, LMO, LNMO), binder and monomers (e.g. pyrrole, aniline, etc.)  selected to polymerize into a conductive polymer upon partial delithiation of the cathode active material during the first charging cycle. The use of conductive polymers provides good electronic contact between active particles and with the current collector and acts as host material for lithium ions. 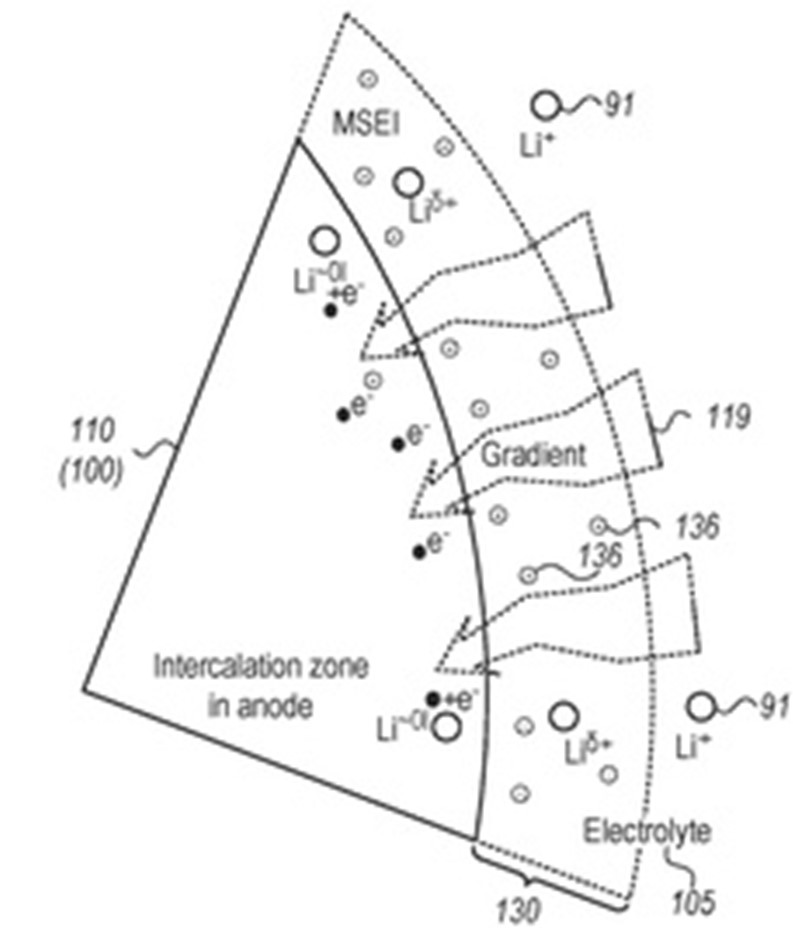 StoreDot’s patent applications also unveil several strategies at battery cell level to improve fast-charging performances and safety. The combination of liquid and solid electrolytes improves safety and ionic conductivity (US20210336292). A specific electrolyte composition inert towards anodes can be used to form an SEI layer on the cathode rather than the anode (US20210203002). Pre-lithiation of electrodes is improved using separators coated with a lithium layer protected with a soluble polymer layer (US20210218005).  Pre-lithiation of anodes with a high lithium content can be monitored based on the cathode capacity (US20210210741). Lithiation and level of metal ions in cell stacks is electrochemically regulated in-situ according to SOH monitoring by metal ion sources connected to the electrodes in the pouches to compensate for lithium removed from the cathode during the first cycles and fixed in the SEI (US20190089015, US10297872). The position and shape of metal ion sources are optimized to create uniform metal ion movements to the electrode surface and favorable SEI formation. Battery cells can have internal power management (US20160241070, US9225187). Specific manufacturing processes are used to improve the cohesion between the current collector, the electrodes and the separator (US9406927, US20180175355, US10033023). 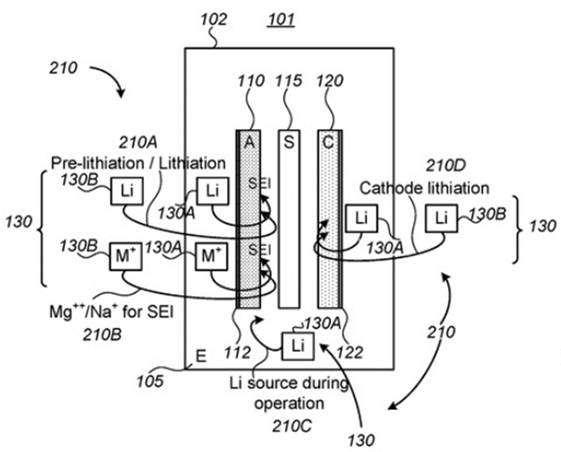 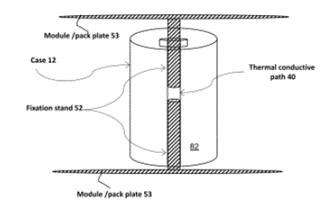 Figure 6: Battery cell with a thermal conductive path in the center (StoreDot patent application US20220093988).

StoreDot also holds a patent on transparent pouches (US10818883) and supercapacitor-battery coupling (US10110036).

StoreDot, a key-player to follow in the field of improvement of EVs’ batteries, according to Volvo

Nowadays, major car makers are entering the race to find the most innovative and promising battery developments to give them the competitive edge to win electric vehicle market shares. Some car manufacturers have been securing their IP position on battery materials and cells for several years now. On the contrary, Volvo only filed patents at battery pack level, and wants to secure its position on promising technologies via key investments in start-ups such as StoreDot. The collaboration between Volvo and StoreDot will reinforce Volvo’s position on promising fast-charging battery cell technologies.

Patenting activity in the battery field is very much thriving, and attractive at every level of the supply chain, especially on hot topics such as NMC cathodes, silicon anodes and solid-state batteries. In such a highly competitive and dynamic environment, it becomes increasingly critical to have good knowledge of the patent landscape and understand the strategy of the different players. As such, Knowmade publishes IP reports on power and battery and sets up  IP monitoring services in order to track and analyze the competitors’ R&D and IP strategies, to reveal where industry leaders, newcomers and start-ups are focused, and give an early view into the strategies they are pursuing, technologies they are investing in and products they are building.