SOPHIA ANTIPOLIS, March 17, 2021 | Northvolt announced the acquisition of Cuberg, specialized in lithium-metal batteries with ionic liquid (press release). This acquisition is expected to give Northvolt an interesting position in terms of intellectual property (IP) and know-how on high energy density lithium-ion batteries.

Northvolt is a Swedish battery developer and manufacturer specialized in lithium-ion (Li-ion) batteries for electric vehicles. It was founded as SGF Energy in 2015 by Peter Carlsson (former executive at Tesla Motors) with the mission to build the world’s greenest battery to enable the European transition to renewable energy. Since its creation, Northvolt has attracted the attention of the European Investment Bank and numerous private companies, such as BMW, Volkswagen, Scania, Vattenfall, ABB and Siemens.

Northvolt develops lithium-ion batteries with NMC cathode materials, one of the most attractive cathode materials today. The company plans to control the whole supply chain to produce its batteries, from the manufacturing of active materials to the production of the battery cell and modules. “The NMC lithium-ion battery is a very competitive landscape both in terms of the market and related patents. There are more than 5,000 patent families related to the whole NMC lithium-ion battery supply chain (material manufacturing and its use in electrodes and batteries)”, says Fleur Thissandier, PhD, Technology and Patent Analyst Battery & Materials at Knowmade. In such a competitive landscape, Northvolt’s strategy appears to be to firstly get patent licensing agreements for developing its products, then start its own R&D developments. The company filed its first patent applications in 2018/2019, grouped into two patent families (i.e. single inventions filed in multiple countries), and all of them are still pending. A first invention is related to lithium transition metal composite oxide and its production method (WO2020/074676), and it claims a wide range of material composition, including NMC materials. The other invention is related to a process for the recovery of cathode materials (mainly NMC) in the recycling of batteries, especially the removal of aluminum and iron during the recycling process (WO2020/212363). This patent application is concomitant with Northvolt’s investment in the recycling of Li-ion batteries. Indeed, in 2020, Hydro and Northvolt launched the JV HydroVolt to establish an electric vehicle battery recycling facility in Norway in 2021.

In 2021, the acquisition of Cuberg, an American start-up spun off from the materials science department at Stanford University in 2015, is another step towards Northvolt’s objective of developing “green batteries”. Indeed, Cuberg aims to commercialize next-generation battery technology combining a lithium-metal anode with an ionic liquid electrolyte (molten salts, mainly organic, with melting points below 100°C, considered “green” electrolytes).

Ionic liquids have been envisioned for battery applications for more than 10 years and are presently considered among the most attractive electrolytes for the development of advanced and safer lithium-ion batteries. Most ionic liquids are organic salts with a degree of variability that can be controlled by molecular designs (Figure 1). They are composed of organic cations, such as pyridinium (PY), imidazolium (IM), pyrrolidinium (PYR), ammonium and sulfonium; and inorganic or organic anions, such as BF4−, PF6−, triflate (CF3SO3−) and bis(trifluoromethanesulfonyl)imide (TFSI) ((CF3SO2)2N−).

There are advantages to using ionic liquids in batteries:
– Ionic liquids have a larger electrochemical stability window (voltage range without electrolyte degradation) compared to conventional liquid electrolytes, which enables the use of high voltage cathode materials in the battery cell and reaching a higher energy density (autonomy of the EVs).
– Ionic liquids are stable at a higher temperature than conventional liquid electrolytes, have low vapor pressure (hard to ignite), non-flammability and non-toxicity which leads to a safer battery.
– Ionic liquids have good ionic conductivity, which allows for good power density (speed and acceleration of the EVs).
– Ionic liquids also have high chemical and thermal stability and good solubility in various organic and inorganic materials.

By acquiring Cuberg, Northvolt also reinforces its patent portfolio. Indeed, Cuberg has two patent families with pending patent applications in the US, Canada, Europe, China and a granted Russian patent. It is worth noting that the company does not appear to be extending its patents in Japan and Korea, two leading countries in the battery field. “A closer look at Cuberg’s patent portfolio indicates that both inventions relate to Li-ion batteries with an anode comprising lithium-metal (i.e. lithium-metal or lithium-metal alloys), a cathode comprising well-known cathode oxide materials (such as NMC), a polyolefin separator (with or without a ceramic layer) and an electrolyte comprising an ionic liquid and a lithium salt”, affirms Fleur Thissandier. “A first invention refers to the additional use of an organic co-solvent with an ether function (US20200194786). The other invention relates to the use of polyimide as cathode binder (US20180248221)”, she adds. 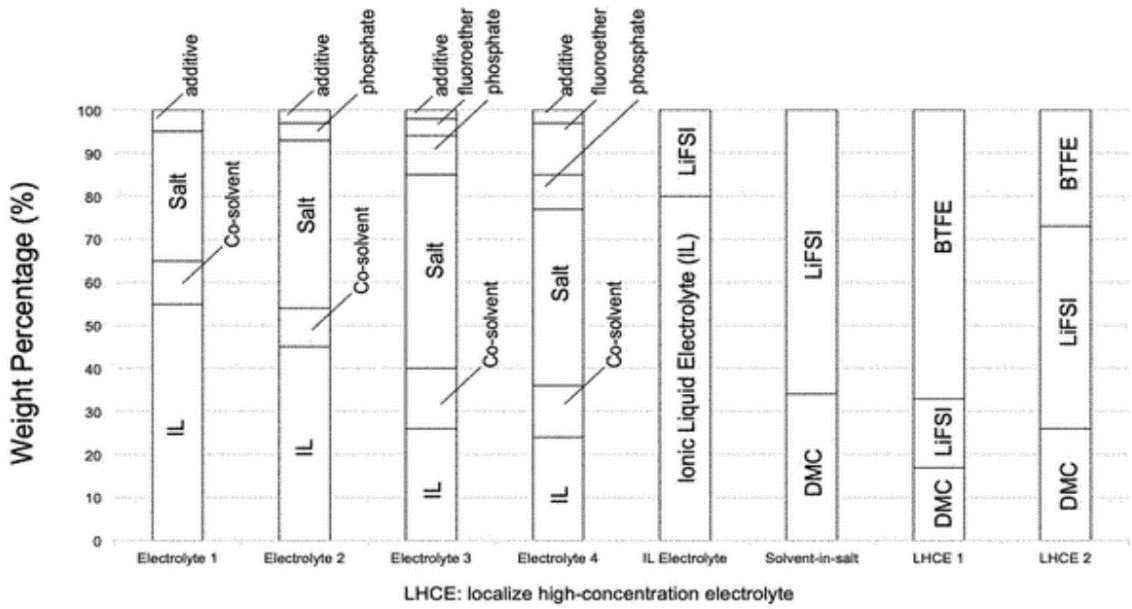 Figure 1: Cuberg’s patent application US20200194786: Electrolyte systems 1 through 4 of a preferred embodiment, in comparison with other non-embodiment prior art electrolytes.

Additionally, Cuberg could have licensing agreements on patents owned by Stanford University from which Dr. Mauro Pasta, co-founder of Cuberg, originates. Dr. Pasta is also the inventor of 6 patent families assigned to Stanford University. The patent US9029015 is the only one related to Cuberg’s products, but it seems to have been abandoned in 2019 (non-payment of maintenance fee). Another patent US10333171 relates to solid electrolytes based on hexacyanometallates for various battery technologies (Li-ion, Na-ion, K-ion). The other inventions are not related to Li-ion technology.

The acquisition of Cuberg is a sign of Northvolt’s willingness to increase its activities outside Europe. By acquiring Cuberg, Northvolt secures an advanced Li-ion battery technology to accelerate the development of battery cells with higher energy density. Furthermore, Northvolt’s IP position is potentially reinforced in the US and Europe. Moreover, the inventions disclosed in the patent applications undoubtedly represent a relatively small fraction of Cuberg’s know-how in the field of lithium-metal batteries and ionic liquids.

Patenting activity in the battery field is very much thriving, and attractive at every level of the supply chain, especially on hot topics such as NMC cathodes, silicon anodes and solid-state batteries. In such a highly competitive and dynamic environment, it becomes increasingly critical to have good knowledge of the patent landscape and understand the strategy of players. As such, Knowmade has published several reports and set up multiple monitoring services in order to track and analyze the latest patenting activity of competitors engaged in the development of Solid electrolytes for Li-ion batteries, Solid-state batteries, NMC Li-ion Batteries, and Silicon anode for Li-ion Batteries (upcoming report in 2021).

Discover our analysts’ work through patent landscape reports about batteries.