SOPHIA ANTIPOLIS, France – October 26, 2020 | On October 16, 2020, STMicroelectronics announced the acquisition of a French fabless company, SOMOS Semiconductor (“SOMOS”), specialized in RF power amplifiers (PA) and RF front-end modules (FEM) based on the mainstream complementary metal-oxide semiconductor (CMOS) technology (Press release). The acquisition is expected to strengthen STMicroelectronics’ position in terms of IP and know-how, in preparation for the emerging IoT and 5G markets. 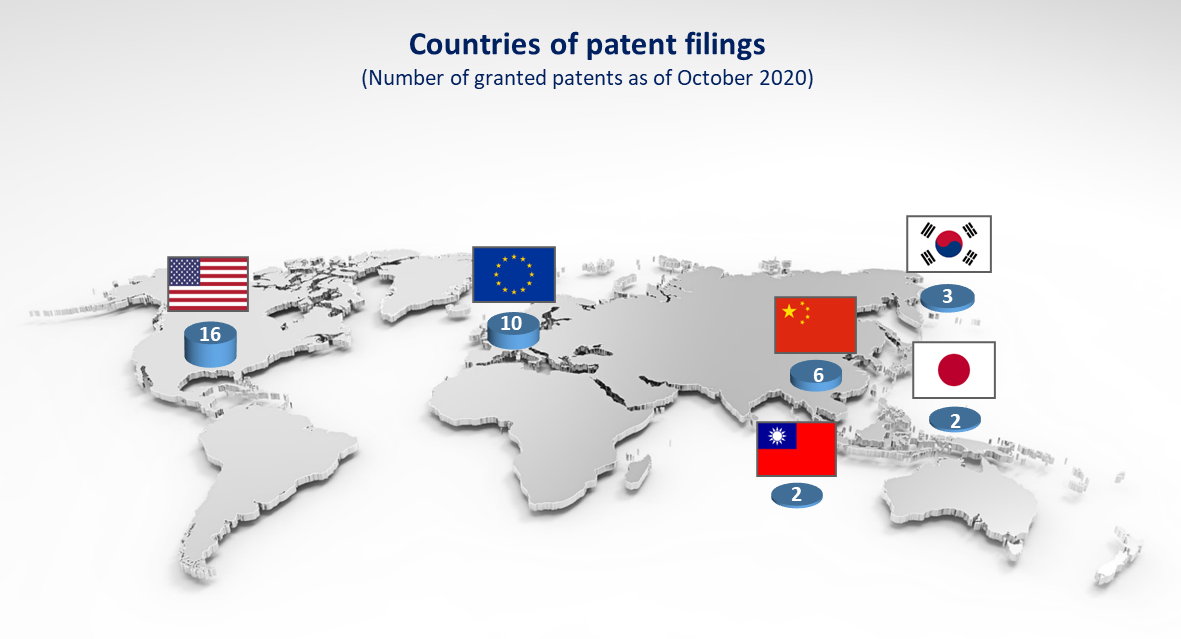 As of October 2020, SOMOS owns 39 patents, of which 16 are US patents (Figure 1). In Europe, two pending patent applications published in 2015 and 2018 could add to the 10 patents already granted over there. Overall, the patent portfolio consists of 8 to 10 patent families (single inventions filed in multiple countries) with at least one granted member, and one patent family with no granted member but a pending patent application in Europe. 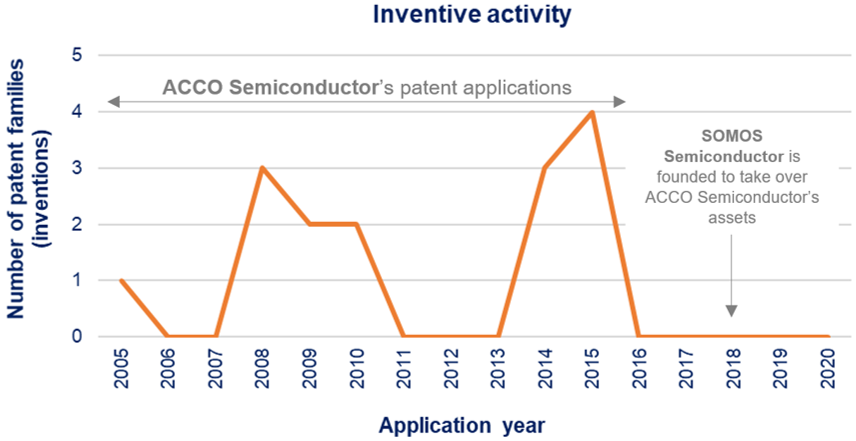 SOMOS Semiconductor was created in 2018 to take over the assets and businesses of ACCO Semiconductor (California, USA), which was placed into liquidation the same year. As such, the patent portfolio of SOMOS actually results from ACCO Semiconductor’s patenting activity between 2005 and 2015 (Figure 2), which is one reason for the high number of US patents in the portfolio of the French company. In the field of RF FEM and RF PA, the main patent applicants referring to SOMOS’ patents in their own patents are TSMC, pSemi, Macom, Qorvo and Qualcomm.

“A closer look at the patent portfolio indicates that most inventions relate to silicon-based power amplifiers in a view to enhance the trade-off between the breakdown voltage and the RF performance in CMOS devices” affirms Remi Comyn, PhD, Technology and Patent Analyst Compound Semiconductors and Electronics at Knowmade. Indeed, the RF performance of a CMOS device may be improved by reducing gate geometries. However, a smaller gate geometry reduces the breakdown voltage of the CMOS device. Because the reduced breakdown voltage limits the voltage swing available at the output of the CMOS device in an amplifier configuration, such CMOS devices are less useful in power applications. In order to overcome the problem, the conventional approaches consist of enlarging the width of the device to obtain a larger current drive with a lower swing voltage, but it brings about an undesired capacitive load to the driving circuit. Alternatively, laterally diffused MOS structures (LDMOS) were developed, as well as devices with thicker and higher resistivity substrates, including Reduced Surface Field (RESURF) devices. Such devices have enhanced breakdown voltage but present higher on-state losses.

Figure 3: SOMOS’ patent US9627374 Electronic circuits including a MOSFET and a dual-gate JFET

Overall, more than 20 patents have been filed for two inventions focused on CMOS power amplifiers. Such a high number of patents for a single invention is explained by the fact that in the USA, it is possible to file divisional, continuation and continuation in part for a single invention. On the other hand, during its investigation of SOMOS’ patent portfolio, Knowmade identified additional topics of interest for STMicroelectronics in the field of IoT/5G applications:
• RF switches
– Patent US9143124 (2015) is directed at switches for use in RF devices that offer a better balance of power losses and switching times than switches of the prior art.
– Patent US8532584 (2011) deals with an effect known as parasitic leakage in an RF transceiver, as well as the enhancement of the breakdown voltage of a CMOS-based RF switch device.
• Power amplifiers / RF amplifier circuits with improved linearity (patent US9621110, entitled “Capacitive cross-coupling and harmonic rejection”, 2016)
• Sigma-delta modulator including truncation for analog-to-digital converters (ADC), digital-to-analog converters (DAC), frequency synthesizers, switched amplifiers, etc. (patent US7808415, published in 2017). 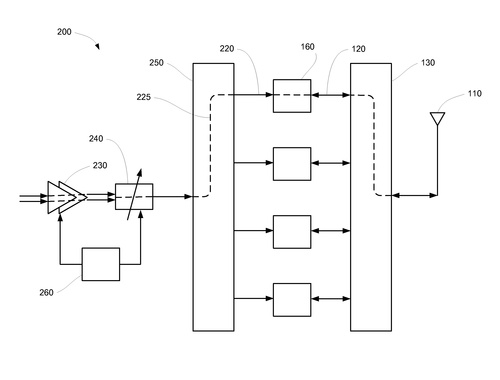 In the field of telecommunications, and more particularly for cellular phones / smartphones, STMicroelectronics owns a relatively small patent portfolio compared to the leading patent applicants Murata, Qualcomm, Skyworks and Qorvo. “With the acquisition of SOMOS’ patent portfolio, STMicroelectronics can now rely on about 40 additional patents focusing on CMOS power amplifiers and RF switches, including patents explicitly directed at wireless communications. The portfolio extends beyond RF FEM, with patents related to modulators for DAC/ADC converters. Furthermore, STMicroelectronics’ IP position is especially reinforced in the US and Europe,” says Remi Comyn. Besides, the inventions disclosed in the patents undoubtedly represent a relatively small fraction of SOMOS’ know-how in the field of RF, analog and digital circuit design, layout, module integration and RF testing, which extends beyond CMOS-based RF circuits.
Importantly, the advent of 5G has been driving the development of new technologies, including Si and Silicon-on-Insulator (SOI) PACMOS in combination with GaAs PA and even emerging GaN PA, to enable better integration and keep FEMs small and cheap despite an increasing number of devices required in the module. GaN also opens new opportunities for high-power, high-frequency PA. With increasing the density of components, it is crucial to limit parasitic signal/interferences and losses while improving insulation between the different components of FEMs. Based on SOMOS’ patents, they have the know-how to address these issues and consolidate STMicroelectronics’ technology and its value proposition for the emerging 5G markets.

In such a very competitive and dynamic environment, it becomes more and more critical to have good knowledge of the patent landscape and understand the strategy of players. As such, Knowmade has set up multiple monitoring services in order to track and analyze, month by month, the latest patenting activity of IP competitors engaged in the development of RF Acoustic Wave Filters and GaN for power and RF applications.