SOPHIA ANTIPOLIS, France – December 19, 2022 │ The need for a strong security and authentication solution for the connected world creates new opportunities for both memory and IC players. With different technology offers and new companies coming in, competition is getting fiercer by the day, as we have seen by analyzing the patents in this field.

With the rapid rollout of digitization in everyday life, data security is a growing concern. Connected objects are processing and storing lots of information that could be hacked remotely and misused, leading to critical data theft and safety issues.

Nowadays, transportation – both public and private – is optimized with the use of on-board advanced electronics, enabling safer and more comfortable driving. The need for automotive cybersecurity is increasing in parallel to the development of connected cars. Some data security issues must be considered for artificial intelligence applications, with the risk of edge AI devices being manipulated remotely, compromising the AI-driven system. One may think of the consequences for assisted medical devices, smart cities, or big data processed in servers. At the same time, there is also strong demand for greater privacy of personal user information in mobile computing devices (computers, smartphones).

In this context, there has been growing demand for secure storage. Among the possibilities, semiconductor companies have recently been promoting the use of so-called Physical Unclonable Functions (PUFs). PUFs are hardware structures designed to utilize the random physical variations which occur naturally in a semiconductor device during the manufacturing process. Because of the uncontrollable and unpredictable nature of these random disorders, building a clone of the device is considered impractical. Like a human fingerprint, a PUF can be considered an inherent and unique identifier of every IC chip. When manufactured, the PUF will be fed a series of different challenges and have its responses recorded. Through this exercise, the designers know each PUF’s unique response to a given challenge and can use this information to prevent counterfeiting, and create and store cryptographic keys. Additionally, an attack would be identified since a PUF would have its physical properties affected by the attack. 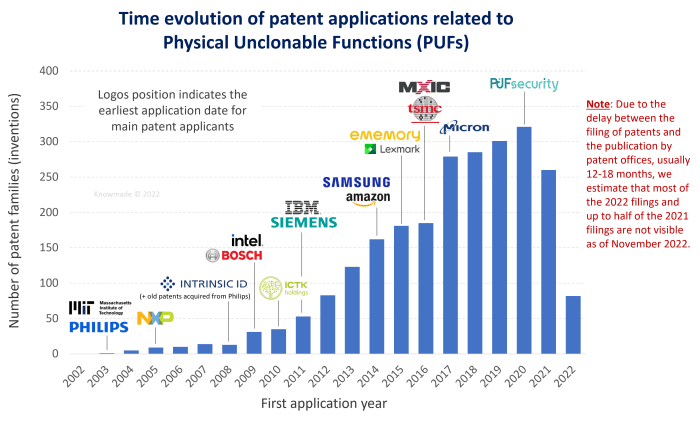 Figure 1: Time evolution of PUF-related patent applications published over the past two decades.

Recent public communications and intellectual property (IP) developments are pointing to memory-based PUFs as a hot topic in the semiconductor industry. Both standard and emerging memory technologies are engineered for PUF applications. The IP protection business is thriving: PUF technology can be licensed from several companies including eMemory (or its subsidiary PUFsecurity), Intrinsic ID and others. We present here a short overview of the available PUF hardware and related patents.

PUFs based on standard memory technologies

While numerous technologies can operate as PUF keys, the most common hardware approach available today is to exploit the randomness of characteristics of semiconductor static random-access memory (SRAM).

The behavior of an SRAM cell depends on the difference in the threshold voltages of its transistors. Intrinsic ID, founded in 2008 as a spinout from Philips Research, is a leading provider of PUF focused on SRAM storage technology. Its SRAM PUFs use unique identity transistor threshold voltage as an identifier thanks to deep submicron variation that occurs naturally during manufacturing. Intrinsic ID has acquired several critical patents filed by Philips from 2003-2008, and today the company owns almost 30 granted patents that enable invention protection in the US and, for most of them, also in additional key countries/areas like Europe, Japan, China and South Korea. PUFs produce device-related and unpredictable responses that makes them good candidates for generating cryptographic keys. Intrinsic ID’s innovations mainly target cryptographic key generation and PUF operation. The oldest patents filed in 2003-2004 have been kept alive up to now (US7877604, US7568113, US7840803); these inventions therefore seem particularly important for the company. They disclose security arrangements for protecting devices or data against unauthorized activity. More recently, patenting activity is oriented towards non-volatile memory (NVM) based PUF for cryptographic devices (US11183083).

In June 2022, eMemory and its subsidiary PUFsecurity, a global leader in the embedded non-volatile memory market, announced together with United Microelectronics Corporation (UMC) the successful silicon qualification of the world’s first PUF-based secure embedded flash solution (see press release). By screening eMemory’s sizeable patent portfolio of almost 500 inventions, it appears that the company owns more than 20 enforceable patents on PUFs. The IP protection is device-oriented towards non-volatile memory, especially flash technology. More recent patent applications also implement emerging NVM (US20210149636, US10839872, US11055065). PUFsecurity has a portfolio of seven patent families (inventions) focused on circuitry and systems for calculating, generating random numbers and an electronics system capable of self-certification.

PUFs based on emerging memory technologies

Emerging memory technologies have been intensively developed for low-power IoT applications and are now getting more attention for data security. Several companies specialized in resistive random-access memory (RRAM or ReRAM) are currently taking advantage of the random physical properties inherent to RRAM devices for PUF development.

While CrossBar’s ReRAM technology has been traditionally utilized for non-volatile memory, the company has recently introduced its ReRAM cell technology for novel use as cryptographic keys for the secure operation of electronic devices (read more). CrossBar claims that ReRAM keys have a higher level of randomness, much lower bit error rate and higher resistance to invasive attacks than SRAM commonly used for PUFs. CrossBar’s new ReRAM PUF technology targets applications requiring both high security (PUF cryptographic keys) and efficient non-volatile memory embedded in semiconductors. Among the 150+ patented inventions of CrossBar, a few explicitly mention a PUF-based resistive switching device. In one of them, the related patent family comprises five US patents recently issued (US11423984, US11430516, US11430517, US11437100, US11450384), and counterpart applications still pending in Europe, China and Taiwan. Other CrossBar patents may be used for PUF applications, although Crossbar does not usually disclose a particular application for its inventions.

Another RRAM specialized company, Weebit Nano, is also stepping into the IC security market. Weebit Nano holds 14 patent families, all related to RRAM or the association of RRAM in crossbar memory array for high-density storage. However, Weebit Nano does not yet seem to have a patent explicitly mentioning a PUF application. 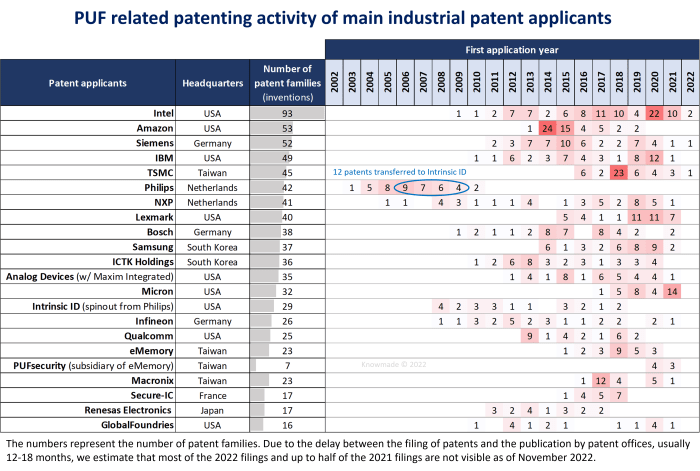 A safety must for the automotive industry

Vehicles are relying more and more on electronic components enabling advanced driver-assistance systems (ADAS), including surround view, automated emergency braking, parking assistance, collision avoidance systems, autonomous driving. These applications require sensors to provide accurate and reliable information such as pressure, temperature, motion, images, and changes in direction. The risk that a third party access the driver’s personal information or take control of the vehicle must be avoided. Thus, in the near future, we can expect a rise in regulations, particularly electronics safety regulations; because in applications like transportation, data integrity saves lives. New standards will require more R&D to bring PUF and other security hardware to the best level of trust. In August 2022, Winbond Electronics became the world’s first memory vendor to receive ISO/SAE 21434 certification for a Road Vehicles Cybersecurity Management System (see press release). The ISO/SAE 21434 standard protects vehicle and automotive security by specifying the requirements to make automotive systems more robust against cyber-attacks. We can expect to see more news of this kind from industrialists, to secure their position in assisted driving transportation and connected vehicles.

… And an ever broader typology of actors getting involved

Memory pure players aren’t the only ones interested in PUF. IC companies like Intel, IBM, Samsung, TSMC and memory companies like Macronix are taking part in the competition. Another competitor, Maxim Integrated, an analog IC semiconductor supplier now part of Analog Devices, developed secure authentication with PUF and enhanced security with transistor logic gate encryption (US9705501). A Maxim Integrated patent application refers to a secure system for protecting sensitive data without using a backup energy source (US20180018673). On the related topic of cryptography, the typology of patent applicants broadens ever further with competitors like Mastercard, Amazon, Visa, Microsoft.

In an increasingly interconnected world that relies heavily on electronics, data security is a must. Primary methods to protect electronic data are challenged by ever more sophisticated hacking techniques. Physically unclonable functions (PUFs) have emerged as a hardware security solution, that offers an unpredictable semiconductor device identifier or cryptographic key by exploiting the true randomness of physical properties in silicon devices. As emerging security regulations, safety and personal data concerns gain momentum, memory technology like SRAM, flash and emerging non-volatile memories are emerging as an innovation driver and a security must. The semiconductor industry is clearly aware of the importance of this field, and is currently making efforts to drive innovation, protect technology and strengthen its position.

About our analysts
Dr. Pauline Calka works for KnowMade as a patent analyst in the fields of semiconductor manufacturing and advanced packaging. She holds a PhD in Memory from the University of Grenoble Alpes (France), in partnership with the CEA-Leti (France). After an Alexander von Humboldt Postdoc fellowship position at the Technical University of Berlin (Germany) and the Leibniz Institute for High Performance Microelectronics on ReRAM development, Pauline worked five years at ASM International (Belgium) as Senior Process Engineer on thin film development for logic, memory and MEMS, and two years at CEA-Leti as Integration Engineer on imaging CMOS sensors.