SOPHIA-ANTIPOLIS, France – February 4, 2022 | In January 2022, Mercedes-Benz, the consumer brand of Daimler, acquired a stake in Luminar Technologies equaling about 1.5 million shares, less than 1% of the company (see here). Such an acquisition results in the collaboration between two important players in the LiDAR for automotive patent landscape. Indeed, on the one hand, Luminar is one of the intellectual property (IP) leaders among the LiDAR pure players (see figure 1). Since 2017, the company has strengthened its IP position in the scanning LiDAR segment with more than 80 inventions, of which 60+ specifically describe optical detectors (AlInAsSb avalanche photodiode), the LiDAR system, calibration methods, driving circuit and even data/sensor fusion, dedicated to automotive applications. After consolidating its US patent portfolio, Luminar is starting to extend some key patents in China and Europe to protect its inventions in these crucial market areas. 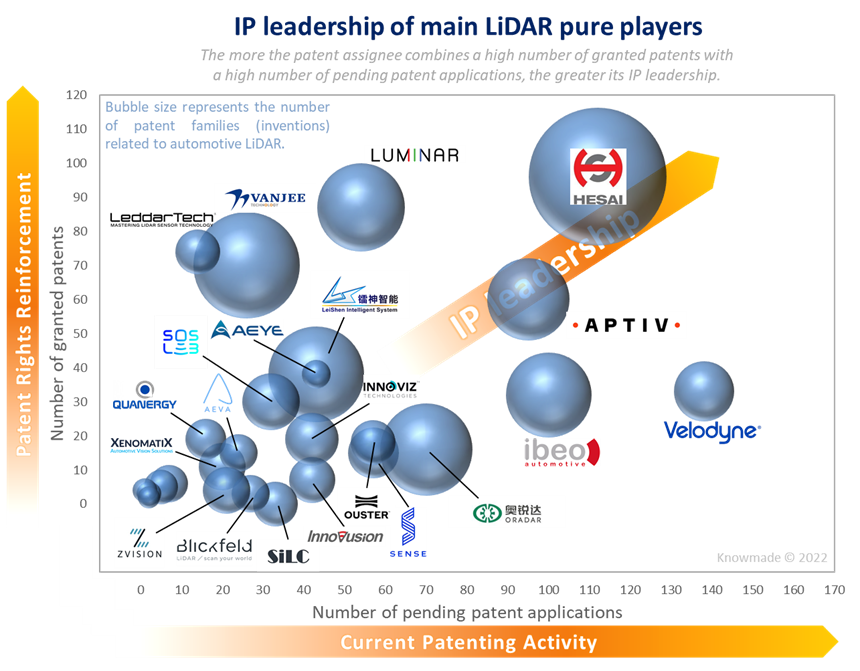 On the other hand, Mercedes-Benz LiDAR patents are all filed under the Daimler name, which is one of the most active car makers of the LiDAR patent landscape. In total, Daimler has filed more than 200 patent families (inventions) related to the integration and data management of LiDAR in vehicles. Between 2000 and 2017, Daimler had a first period of patenting activity related to ADAS applications. Today, the company has abandoned most of these patents and started a new patenting activity (see figure 2). The company’s IP strategy indicates a change in its R&D, moving from low-level ADAS (detection of lines, rain, traffic lights) to autonomous vehicles (environment detection, data fusion, data & error processing, etc.). By acquiring a stake in Luminar, Mercedes-Benz/Daimler is accelerating and securing its autonomous vehicle development by benefiting from Luminar’s strong IP position and know-how in the upper part of the supply chain.

Luminar Technologies achieves high-performance LiDAR using a chip design that utilizes indium gallium arsenide rather than silicon, and a more sensitive laser that operates on a 1550-nm wavelength rather than the 905 nm wavelength used by competing LiDAR sensors. Today, Luminar’s patents cover all aspects of the LiDAR system (see figure 3), from detectors to the system and its package design. In addition, the company’s patent portfolio includes a range of patents describing control methods such as calibration methods, the LiDAR data fusion process or compensation methods to reduce the noise or sense drift. Regarding the hardware, Luminar’s patents describe a LiDAR comprising a laser diode, a semiconductor optical amplifier and a polygon MEMS micromirror. In some recent patents, Luminar added a digital micromirror device (DMD) as a spatial light modulator. On the receiver side, the patents do not specify the type of detector, and mention single-photon avalanche diodes (SPAD), avalanche photodiodes or even PN photodiodes. However, Luminar has developed its own AlInAsSb avalanche photodiode.

In its LiDAR for Automotive patent landscape report, Knowmade has highlighted a lot of significant changes in the last 3 years. Denso lost its leading IP position to Bosch. Chinese LiDAR pure players Hesai Technology and Robosense became the new IP challengers, while many smaller IP players just entered the game or closed the gap with current leaders. In the meantime, the LiDAR automotive market has just begun to grow and will certainly enter a consolidation phase which will accelerate and increase the number of M&A. Robotaxi makers and tier one suppliers willing to acquire new technologies and know-how would necessarily take a look at LiDAR pure players. Today, Luminar is the LiDAR pure player with the most collaborations. Indeed, in addition to Mercedes-Benz, Luminar has partnerships with Volvo, Audi, Toyota Research Institute, Intel’s Mobileye, Airbus, and two Chinese companies: automaker SAIC and AV operator Pony.ai. However, other players like Ibeo Automotive or LeiShen Intelligent System have noticeable patent portfolios that may attract OEMs. Some smaller IP players such as Ouster/Sense Photonics have chosen to develop full solid-state LiDAR which may be attractive in the longer term.

About our analysts
Paul Leclaire, PhD. Paul works for Knowmade in the field of MEMS, Sensors and RF technologies. He holds a PhD in Micro and Nanotechnology from the University of Lille, France, in partnership with IEMN in Villeneuve-d’Ascq and CRHEA-CNRS in Sophia-Antipolis. Paul previously worked in innovation strategy consulting firm as consultant.