SOPHIA ANTIPOLIS, France – January 20, 2022 | Silicon Carbide (SiC) power devices hold great promise as the electric vehicle (EV) market gets better and better, with forecasts announcing a double-digit annual growth rate for the next decade. Indeed, most EV makers are integrating or evaluating the use of SiC power devices in different EV systems including the traction inverter, the DC-DC converter, and the on-board charger. Furthermore, SiC power devices are also good candidates for the fast-charging infrastructure required for mass EV adoption. According to McKinsey & Company, China, which is already the top market in the world for EVs, will continue to have the most dynamic market over the next decade with a 24% annual growth rate between 2020 and 2030. As such, China has become a priority target for leading SiC device market players STMicroelectronics, Wolfspeed, Rohm Semiconductor, Infineon, onsemi and Mitsubishi Electric, together owning more than 80% of the global market. On the other hand, with the US-China trade war shaking its semiconductor industry, Beijing central government is urging Chinese companies to catch up with foreign companies in the latest and most strategic technologies, including SiC and GaN technologies, pursuing the goal of eventually becoming self-sufficient therein.

In this context, Knowmade, which has been monitoring the SiC patent landscape for several years, recently focused its investigations on Chinese players shaping the emerging SiC supply chain in China.

Figure 1: Countries of patent applicants in the SiC patent landscape.

The SiC patent landscape has been dominated by Japanese players Mitsubishi Electric, Sumitomo Electric, Denso, Fuji Electric and Toyota Motor, which have been driving patenting activity for at least two decades. However, Chinese patenting activity, which took off in the early 2010s, grew dramatically over the last decade. As a result, Chinese patent applicants took the Intellectual Property (IP) leadership from Japanese patent applicants after 2018 (Figure 1). What’s more, Chinese players have been further accelerating their patenting effort in the last couple of years, to catch up with leading foreign companies, while Japanese patenting activity has reached a plateau since 2013, reflecting the high degree of technology maturity reached by Japanese SiC players. Interestingly, the Chinese patents are equally distributed between the material (bulk SiC, SiC epitaxial wafers) and the power devices (SiC MOSFET, SiC JFET, etc.). About half of the inventions related to SiC material focus on apparatus and tools for SiC growth which represent the first technical challenge and hurdle for any newcomer in the SiC bare wafer business. Indeed, there is no unified standard growth furnace for SiC growth technology, unlike for Silicon growth technology, for example. 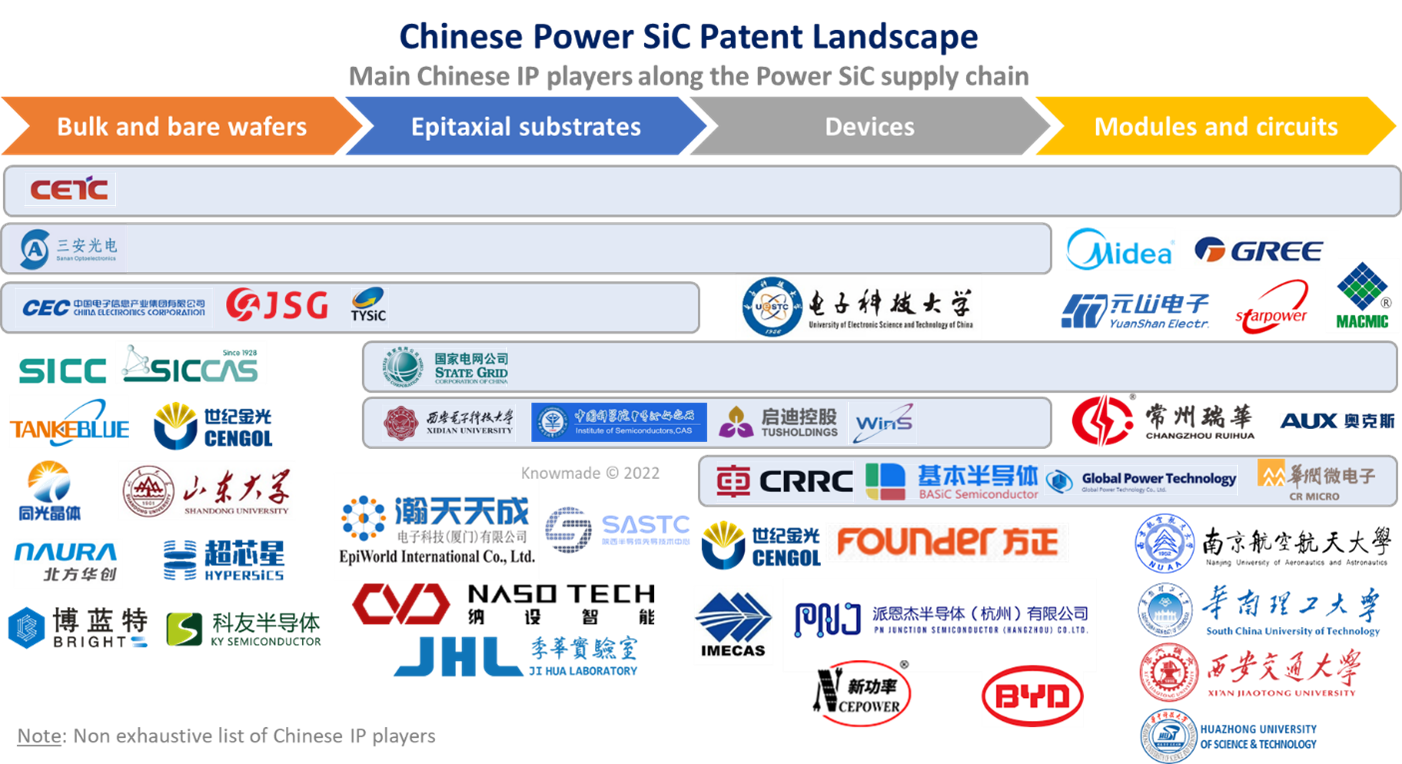 The breakdown of Chinese applicants’ patent portfolios along the Power SiC supply chain as shown in Figure 2 demonstrates that numerous Chinese companies are now present – in terms of IP – in each segment of the supply chain. For instance, in the field of bulk SiC, research organizations such as CETC’s research institutes, Shandong University and Chinese Academy of Sciences (SICCAS, Institute of Physics, Institute of Semiconductors), pioneered the research on SiC crystal growth in China and promoted the emergence of domestic industrial players such as TankeBlue (founded in 2006), SICC (2010) and Synlight Crystal (2012). Lately, additional start-up companies arose from these research laboratories, such as Shanxi Shuoke Crystal (linked to CETC) and Guangzhou Nansha Wafer Semiconductor Technology (Shandong University) in 2018. In addition, several Chinese companies involved in the development and commercialization of sapphire substrates have also entered the bulk SiC IP landscape, such as Bright Semiconductor (entered in 2019) and JSG (2020). Eventually, IP players such as Cengol (entered in 2011) and San’an Optoelectronics (2020) aiming at establishing a vertical integration model have entered the bulk SiC patent landscape as well. Cengol was backed by SICCAS in establishing its first four-inch pilot line in 2012 and acquired IP rights on at least 17 patented inventions owned by Beijing Huajin Chuangwei Electronics in the field of bulk SiC in 2016 and 2017. On the other hand, San’an Optoelectronics, whose SiC patent portfolio was analyzed in a previous article from Knowmade, acquired Nortel New Materials in 2020 and started building a platform in the Changsha high-tech industrial parkcovering all manufacturing steps, from crystal growth of bulk SiC to wafers, power devices, packaging and testing. 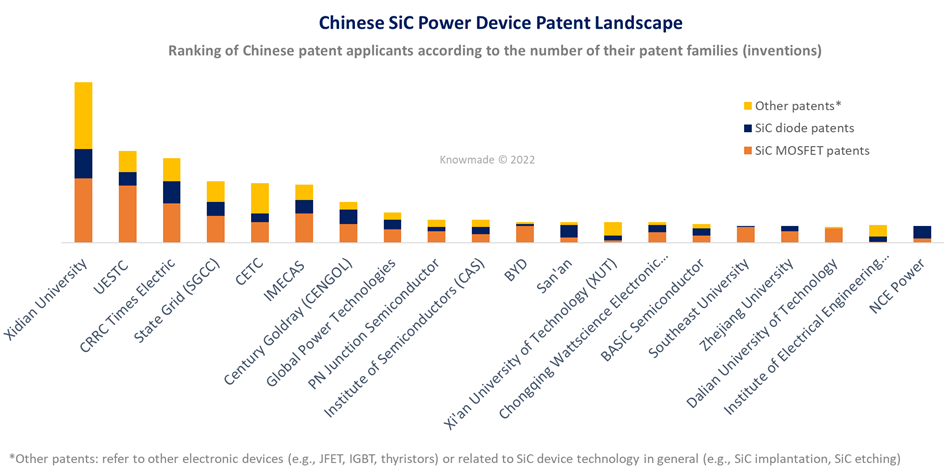 Figure 3: Ranking of the main Chinese IP players in the field of SiC power devices.

Overall, the number of Chinese patent applications for SiC MOSFETs is twice the number of applications filed for SiC diodes, which reflects the difficulty of developing reliable SiC MOSFETs, especially due to issues in the gate oxide structure. This can be verified for most leading patent applicants, except for San’an and NCE Power which first focused their patenting activity on SiC diodes (Figure 3). Interestingly, compared with bulk SiC and SiC epitaxial wafers, in the field of devices, modules and circuits, the patent landscape features a much denser collaboration network between Chinese IP players, especially between research organizations and industrial players.

Finally, Chinese patenting activity related to modules and circuits took off more recently (from 2015) but has already given rise to more than 800 inventions. Patenting activity related to SiC circuits is strongly supported by Chinese academic players such as Nanjing University of Aeronautics & Astronautics, South China University of Technology and Xi’an Jiaotong University (Figure 2). Importantly, in a view to address the future EV market, leading Chinese companies in the power module market Starpower and Macmic entered the SiC patent landscape in 2020/2021. What’s more, Yuanshan Electronics, a SiC pure player established in 2020, published their first SiC power module-related patents in 2021 as well, and will further consolidate this part of the domestic supply chain in China.

In conclusion, China is accelerating its patenting activity to support the development of SiC technology, and more importantly to support the emergence of a complete domestic supply chain and secure their power semiconductor product lines. Chinese patent applicants cover the whole supply chain, including relatively well-established IP players on each segment, with a great diversity of players (academic, industrial, foundry, IDM, integrator, pure player, etc.) and a dense network of IP collaborations and IP transfers. As a result, the technological gap with foreign suppliers is expected to narrow in most segments of the supply chain. Chinese SiC players will increasingly focus on improving the penetration rate of SiC domestic products, in a market largely dominated by foreign players. Chinese SiC players are already backed by industrial players that have been seriously hit by US restrictions, including for instance Huawei, which already invested in several key domestic players in the patent landscape (SICC, TySiC, Epiworld, etc.) to secure its future SiC supply. In this context, given the size of the domestic market and the bottleneck caused by the low domestic production capacity of bulk SiC, there might be a long way to go before Chinese SiC players try to conquer new markets abroad. As a matter of fact, less than 3% of Chinese patent applications are filed abroad. Yet by filing more foreign patent applications than their compatriots, certain Chinese players such as SiC substrate maker SICC have already revealed their future international ambitions.