SOPHIA ANTIPOLIS, France – August 27, 2021 | Revenues from the power Silicon Carbide (SiC) device market are expected to exceed $1B for the first time in 2021, and are estimated to rise rapidly over the next few years to reach more than $4B in 2026, according to the latest forecasts announced by market research company Yole Développement in the second quarter of 2021. However, the rapidly growing demand for SiC power devices accentuates the risk of SiC wafer shortage for major SiC device manufacturers such as STMicroelectronics, Rohm Semiconductor and Infineon. In response, SiC device makers have been expanding and diversifying their supplier base over the last few years. It started with the acquisition of SiCrystal by Rohm Semiconductor in 2009, and accelerated in the last 3 years with SK Siltron acquiring Dupont’s SiC wafer division and STMicroelectronics taking over Norstel as the most recent examples. Furthermore, multi-year supply agreements have been announced, especially with Cree/Wolfspeed, whose market share exceeded 60% for SiC substrates in 2019, according to Yole. Likewise, most established SiC wafer makers (II-VI, SiCrystal / Rohm Semiconductor, etc.) have been making investment plans to continuously increase their production, based on new supply agreements with major device makers. The most recent example was given in May 2021 by Showa Denko announcing a two-year contract with Infineon (press release). The announcement drew Knowmade’s attention as Showa Denko (SDK) was identified as a key intellectual property (IP) player in the SiC substrate (bulk & epitaxial wafers) patent landscape. 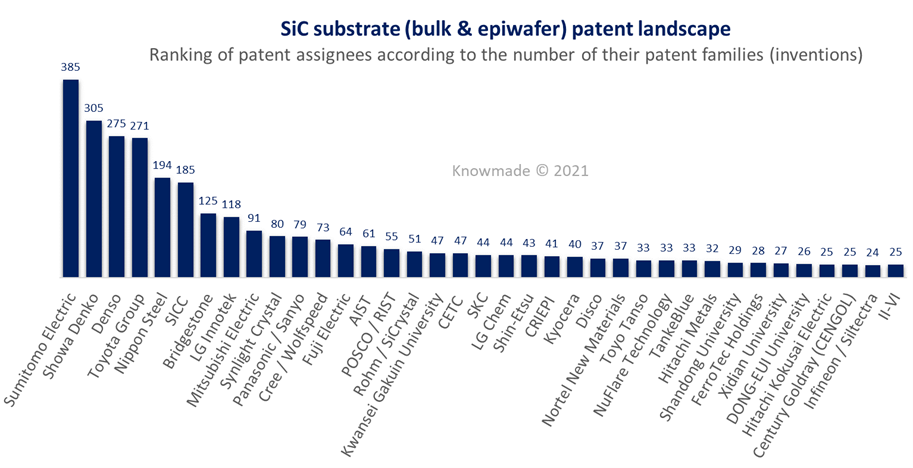 Showa Denko (SDK) exhibits the second largest IP portfolio in the SiC substrate patent landscape (Figure 1), owning more than 300 patent families (a patent family represents a single invention filed in multiple countries). “SDK started filing SiC substrate patent applications in the late 1990s, focusing on the sublimation growth of bulk SiC, but its IP activity in the field really took off in the early 2010s, addressing both bulk SiC and SiC epitaxial wafer fabrication,” says Rémi Comyn, PhD, Technology and Patent Analyst Compound Semiconductors and Electronics at Knowmade. In contrast with other well-established IP players such as Cree/Wolfspeed, II-VI and SiCrystal, whose patenting activity has declined lately, SDK is still very active in the SiC substrate patent landscape, filing more than 70 new inventions since 2019. As a result, nearly 90% of the inventions in SDK’s patent portfolio have been filed and published in the last decade (Figure 2) and about 63% of the inventions concern bulk SiC, versus 37% for SiC epitaxial wafers. Importantly, nearly 65% of SDK’s portfolio has been granted, with more than 190 patents in Japan and more than 80 patents in the US. “Overall, SDK’s portfolio demonstrates remarkable geographic coverage, including most major patenting areas (Japan, USA, China, Europe and South Korea), which confirms its ambitions as a world leader for the sales of SiC wafers. Furthermore, according to the distribution of its pending patent applications in these areas, SDK is aiming to maintain this IP strategy over the next few years,” adds Rémi Comyn.

Showa Denko has been engaged in multiple IP collaborations with other well-established Japanese IP players in the SiC substrate patent landscape. For instance, more than 50 patent applications were co-filed with Denso, which has been using SDK’s 150mm SiC epiwafers for its latest booster power modules for fuel-cell electric vehicles (FCEVs), as announced by SDK in December 2020. In addition, important IP collaborations took place with Toyota (20+ co-filings), CRIEPI – Central Research Institute of Electric Power Industry (10+) and AIST – National Institute of Advanced Industrial Science and Technology (9). Overall, SDK obtained about 20% of its inventions through IP collaborations with other well-established IP players in the patent landscape. 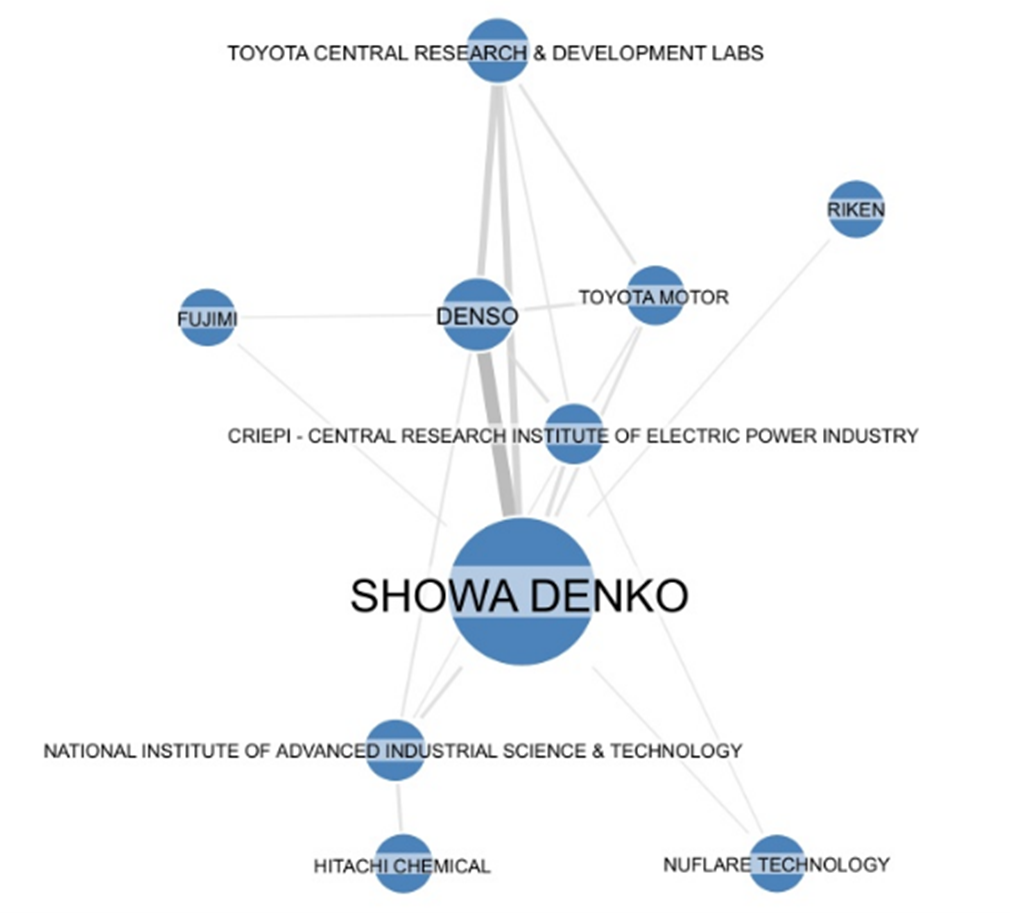 Figure 3: Main IP collaborations of Showa Denko in the SiC substrate patent landscape. (The ball size grows with the patent portfolio size in the field, the line thickness increases with the number of co-filings). 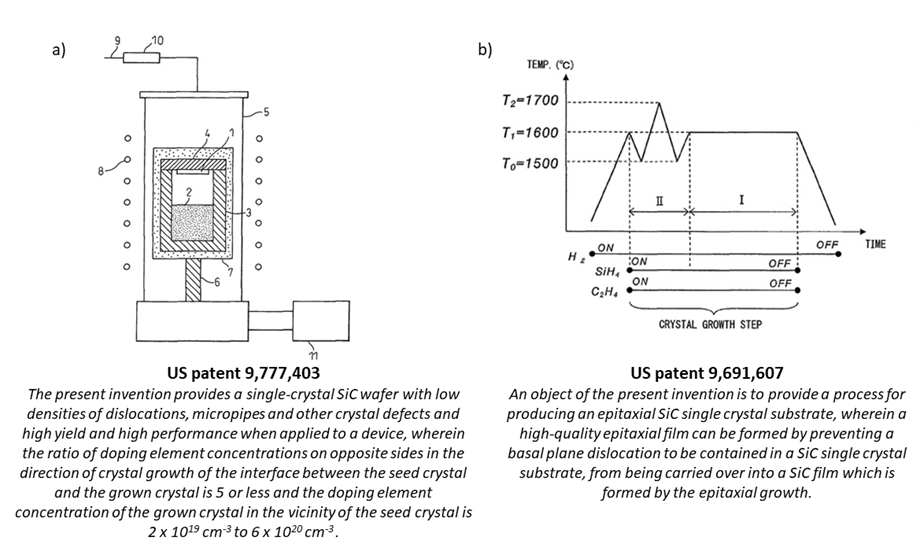 Figure 4: Examples of SDK’s key patent dealing with defects in the field of a) bulk SiC and b) SiC epitaxial wafers. These patents were originally filed by Nippon Steel and acquired by SDK in 2018.

“Showa Denko has also been very active in acquiring patents from historical Japanese players in the SiC substrate patent landscape,” points out Rémi Comyn. In 2013, two years after demonstrating 5-inch SiC wafers for power devices and announcing the development of 6-inch SiC wafers, Bridgestone stopped its patenting activity and transferred 7 patent families to Showa Denko. Likewise, Nippon Steel, which started researching and developing SiC single crystal production using the sublimation-recrystallization method about 30 years ago, terminated SiC research and business in 2018 and transferred all relevant assets and technologies to Showa Denko, including 60 patent families in the SiC substrate patent landscape. Eventually, in 2020, Hitachi Chemical, which holds 6 patent families related to bulk growth, became a consolidated subsidiary of Showa Denko. As a result, more than 20% of SDK’s SiC substrate patent portfolio results from IP acquisitions from other historical players.

Knowmade analyzed the IP portfolio to identify key patents among SDK’s 305 SiC substrate patent families. These patents are considered as key patents because of their capability to limit the patenting activity and/or threaten the freedom-to-operate of competitors in different countries. “Interestingly, nearly half of SDK’s key patents were acquired from Nippon Steel (13) and Bridgestone (4). Furthermore, one key patent was acquired from CRIEPI in 2019. Therefore, Showa Denko’s IP position was significantly strengthened by these patent acquisitions, especially after the IP transfer from Nippon Steel in 2018,” says Rémi Comyn. Overall, the number of key patents is similar for bulk SiC and SiC epitaxial wafers. Most of SDK’s key patents in the field of bulk SiC deal with bulk defects (micropipes, dislocations, polytype mixing, etc.) in SiC crystals formed by the physical vapor transport (PVT) method. Likewise, most of SDK’s key patents in the field of SiC epitaxial wafers address issues related to epitaxial defects (surface defects, protrusions, dislocations, etc.) in 4H-SiC.

Therefore, Showa Denko benefits from a strong IP position in both the bulk SiC landscape and SiC epitaxial wafer landscape. For bulk SiC IP though, Showa Denko competes with numerous other key IP players including Cree/Wolfspeed, II-VI, Denso, Toyota, SICC and Norstel. The situation is different for SiC epitaxial wafer IP, where SDK is well ahead of the other competitors, especially for SiC epitaxial defects where there is only one other IP player of note: Cree/Wolfspeed, which owns 5 key patents in the field. Yet, in the future, the main IP player that could challenge SDK’s leadership in the SiC epitaxial wafer patent landscape is Sumitomo Electric, which owns a large IP portfolio with many pending applications in the field (Figure 5). 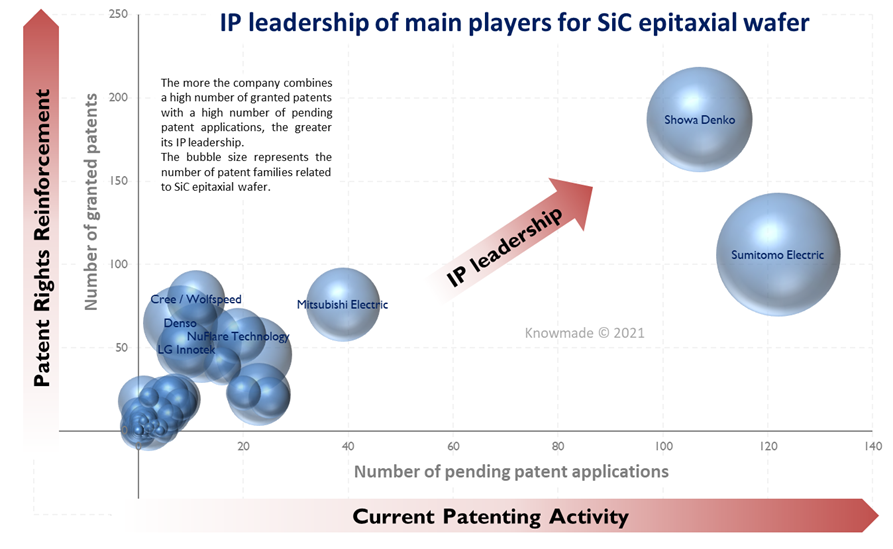 Conclusion – Showa Denko’s patent portfolio in the field of SiC substrates was analyzed and compared to the patent portfolios of its competitors, including major SiC substrate market players such as Cree/Wolfspeed, II-VI, SiCrystal, Norstel and SICC. Over the last decade, Showa Denko has become a key IP player in the field and should continue to show leadership in the next few years based on its current IP activity. In addition to an acceleration in patent filing since 2010, SDK has strengthened its IP position through multiple IP collaborations and acquisitions to cover large technical and geographical areas. A high number of patents granted in numerous countries provides SDK with good capability to threaten the freedom-to-operate of its competitors in the SiC substrate market. Furthermore, IP transfers from historical IP players including Nippon Steel and Bridgestone gave it access to high-quality key patents, enabling SDK to compete with leading patent assignees such as Cree/Wolfspeed in very competitive fields such as 4H-SiC bulk grown by PVT or semi-insulating SiC, where many players own key patents. Therefore, Showa Denko is now in a good position to turn its IP leadership into leadership in the SiC substrate market, especially for power applications, following IP collaborations with major integrators (Denso, Toyota) and now cooperating with Infineon for electric vehicle chargers and solar energy applications.