SOPHIA ANTIPOLIS, France – April 30, 2021 | Why investigate the power module intellectual property (IP) landscape in 2021? – As a result of the boom in electric vehicles (EV/HEV applications) and the growing adoption of wide bandgap (WBG) technologies – especially silicon carbide (SiC) – for power electronics applications, the power module industry faces great opportunities for the next decade, but also challenging times in developing the next generation of power modules. Firstly, module makers will have to comply with relatively new and tough requirements from the automotive industry, in terms of cost and performance, while facing new competition from players in the automotive supply chain (e.g. Tier-I or OEMs themselves). Secondly, the transition from well-established IGBT modules to novel WBG modules will require a high level of innovation to deal with fast switching speed, high power density, high temperature and other technical features very specific to GaN & SiC technologies, which could turn out to be more challenging for module makers new to the field of WBG devices. “Since the purpose of patents is precisely to protect proprietary solutions to key technical issues, the patenting activity related to power modules was expected to accelerate significantly in the last decade, bringing about many changes in the landscape”, says Rémi Comyn, PhD, Technology and Patent Analyst Compound Semiconductors and Electronics at Knowmade. “That means new players from up and down the supply chain, new IP collaborations (licensing, patent co-filings) to combine complementary skills and speed up the development (e.g. bringing together module know-how and WBG device expertise), and new IP strategies focusing on emerging and competitive business areas”, adds Rémi Comyn.

Who were the main innovators in the 2010-2020 power module patent landscape? – Over the last decade, Japanese patent applicants (Mitsubishi Electric, Fuji Electric, Hitachi, Toshiba) have been dominating the Power Module patent landscape in terms of patenting activity: Japanese entities represent more than 50% of top patent assignees (Figure 1). Japanese IP players mostly compete with European IP players (Infineon, Semikron) and Chinese IP players (Midea, Starpower, CRRC). The US are represented in the ranking by General Electric, On Semiconductor and Ford while South Korea has Hyundai/Kia and Samsung as leading patent assignees. Thus, most global leaders in the IGBT module market are well positioned in the ranking (Infineon, Mitsubishi Electric, Fuji Electric, Hitachi, etc.), but face strong competition on the IP battlefield, including from automotive players such as Toyota Motor & Denso.

The Japanese IP domination in terms of new inventions is further confirmed in Figure 2, although Chinese patent applicants have been producing more inventions in the field of power modules than Japanese IP players since 2018. However, the acceleration in Chinese patenting activity must be put into perspective as it is narrowly related to strong incentives from the Chinese government’s policies aiming to transform a manufacturing economy into an innovation-driven economy. Accordingly, it is a general trend, not specific to power modules, which has led to a large influx of patent applications and now raises questions as to the examination capability and reliability of Chinese patent offices, and therefore the very quality of Chinese patents. As a matter of fact, a significant proportion of Chinese patenting activity consists of utility models, for which the level of inventiveness might be lower, or the novelty of the invention might be assessed only at a local level. That being said, a large amount of even low-quality patents does increase the barrier to entry in China, for instance making it more difficult for foreign players to perform freedom-to-operate analysis. Furthermore, such a massive patenting activity often hides the emergence of Chinese patent applicants with actual ambitions as world leaders – and in analyzing patent landscapes, it is one of Knowmade’s objectives to identify these players. Yet the situation in China could be progressively “normalized” in the coming years, since the China National Intellectual Property Administration (CNIPA) announced in January 2021 the end of all patent subsidies by 2025, while subsidies for patent application filings and other stages of the patent prosecution process (e.g. requesting exam) will end by June 30, 2021.

Where are the main areas of patent filing currently? – Also characterizing the Chinese patenting activity are domestic patent filings, which contrast with most foreign leading patent applicants, as illustrated in Figure 3. From Japan, Mitsubishi Electric, Fuji Electric, Hitachi, Rohm and Toshiba are well-established US patent owners as well, and they are now focusing on strengthening their IP position in Europe and China. Actually, Europe is also the main focus for the power module patenting activity of leading patent applicants in the US (Wolfspeed, GE, On Semi, Ford), in South Korea (Hyundai/Kia) and in Taiwan (Delta Electronics), while China remains an area of strong interest for many leading patent applicants as well. With the exception of ABB, European players have not been very active in Japan and seem to focus mainly on China, in addition to their domestic patent filings.

Figure 4: Main patent assignees in the field of power modules for EV/HEV applications

Figure 5: Main patent applicants in the field of power modules for EV/HEV applications

Indeed, every year since 2010, additional automotive players have been identified as new or resuming a patenting activity in the field of power modules for EV/HEV applications (Figure 5). “What’s more, several IP collaborations were identified, involving for instance Toyota Motor & Denso, Hyundai/Kia & Infineon or ABB & Audi. Interestingly, some players such as Rohm Semiconductor or Sumitomo Electric stand out from the other IP players because they have strongly focused their patenting activity for EV/HEV on WBG power modules”, says Rémi Comyn. 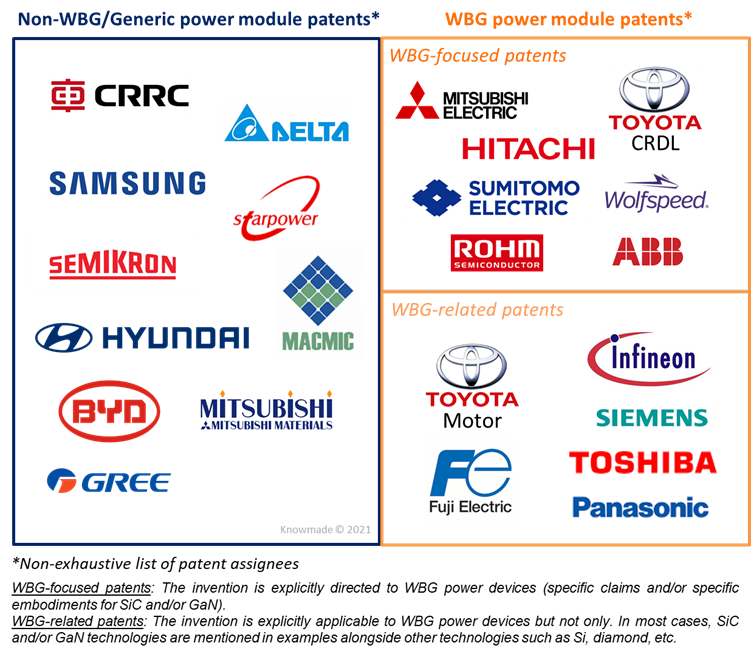 Figure 6: Main patent assignees split according to their focus on WBG power modules.

Figure 7 shows the ranking of the main patent applicants in the field of WBG power modules and illustrates the major domination of the ranking by SiC MOSFET key IP players (Mitsubishi Electric, Fuji Electric, Sumitomo Electric, Hitachi, Rohm, Toyota Motor). Even Wolfspeed, a pure WBG player and a key IP player in the SiC MOSFET patent landscape, and which basically had no patenting activity in the power module patent landscape before 2015 and the acquisition of Arkansas Power Electronics International (APEI), is now well positioned in the WBG power module ranking. “So far, the patenting activity related to WBG power modules has been dominated by SiC power modules, but an increasing number of patent applications more specific to GaN power module technology has been published lately, mainly focusing on the reduction of parasitic inductance at high switching frequencies”, adds Rémi Comyn. Not represented in the ranking, several newcomers have been identified in the WBG power module patent landscape, such as Danfoss, On Semi, Audi and Shindengen Electric.

Conclusion – The power module patent landscape has witnessed major transformations over the last decade. Firstly, Chinese IP players took the lead in the patenting activity after a decade dominated by Japanese IP players, while more and more newcomers showed up every year in China. Secondly, IP players are adapting their IP strategy to new market opportunities, with well-established IP players and new IP players alike focusing on Europe & China as priority areas for filing power module patents. Because a large number of European patents remain pending, it will be important to verify whether or not foreign IP players succeeded in reinforcing their IP position in Europe. Thirdly, the typology of IP players is diversifying, with downstream EV/HEV supply chain members increasing their presence in the power module patent landscape. Important IP collaborations took place in the field of EV/HEV, but the number of IP collaborations is expected to grow further with the advent of WBG power modules for which a specific expertise is required by module makers and/or integrators not mastering WBG technologies. Fourthly, WBG technologies are driving a strong acceleration in power module patenting activity led by key IP players in the SiC MOSFET patent landscape, with more and more players willing to go up in the value chain. However, it is too soon to say how important their IP position will be, depending on their ability to obtain granted patents to protect their WBG power module technology. Finally, the patent analysis confirms the power module industry as a major competitive area in the emerging EV/HEV supply chain and the important role that WBG technologies – especially SiC technology – will play in the next generation of power modules, especially for the electrification of transport. Furthermore, it provides a unique perspective on the strategy of players to conquer new markets and keep up with a highly competitive environment.

Source – All data presented in this article has been extracted from Knowmade’s reports Next-Generation Power Modules Patent Landscape 2021 published in January 2021 and Power SiC Patent Landscape 2019 published in January 2019. Knowmade has been investigating power electronics patent landscapes for the last decade, especially landscapes related to WBG power electronics, and provides patent monitoring services as well as customized patent landscape analyses to complement its collection of reports.