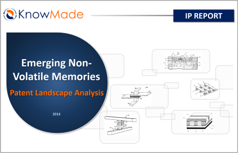 Read our dedicated page if you need clarifications on how KnowMade performs its patent landscape analyses. 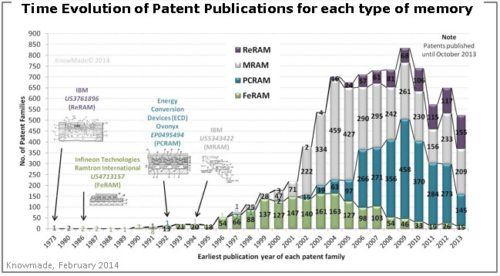 The integration limit of flash memories is approaching, and emerging Non-Volatile Memories (eNVM) to replace conventional Flash Memories have been proposed. Ferroelectric RAMs (FeRAMs), Magnetoresistive RAMs (MRAMs), Resistive-change RAMs (ReRAMs) or Phase-Change Random-Access Memories (PCRAMs) are promising to change the memory landscape. The field of eNVM has shown an intensive patenting activity since early 1990s, with a substantial increase during the past decade. Currently, there are more than 8,600 relevant patent families filed all over the world. Patent families were filed by more than 800 patent applicants mainly located in USA, Japan, Taiwan and China. From a quantitative point of view, the most active companies are SK Hynix, Samsung, Toshiba, Micron Technology and IBM. In addition, startup firms do not file many patents and their main strategy is to license or sell their intellectual property. The patents related to MRAM technology account for more than 40% of filings. The main patent applicants are Toshiba, Samsung and Renesas Electronics which represent together almost 30% of the patents. The MRAM technology was growing between 2003-2007 with more than 50% of patents published during these years. Currently, the number of patents filed has remained stable, with about 200 patents filed per year. About 30% of patent families are related to PCRAM technology. They were mainly filed by SK Hynix and Samsung, they represent almost 40% of published patents. The PCRAM technology was increasing between 2002 and 2009, with more than 450 patent families published in 2009. Publication patents is decreasing these last 4 years, however more than 200 patents are still published every year. Patent filings will continue on PCRAM technology to further improve memory applications. The patents dedicated to FeRAM technology represent 20% of filings. They were mainly filed by SK Hynix, Samsung and Seiko Epson which represent almost 50% of published patents. FeRAM is a mature technology, and FeRAM is not an active patent field yet. Patents related to ReRAM technology account for almost 10% of new patent filings. ReRAM is the newest patented technology and the number of patent publications will continue to increase in the coming years. With over 100 patent families already filed, Samsung will play a significant role in this emerging technology development.

A vast number of patents

Our search strategy combines automated and manual screenings that have led to the selection of more than 8,600 relevant patent families. Those have been segmented by type of memory that are analyzed in detail: FeRAM, MRAM, ReRAM, PCRAM. For each memory type, the report provides a detailed analysis including the time evolution of patent filings, identification of the key players, collaborations networks, as well as the identification of the key patents based-on citations and impacts in eNVM technology. 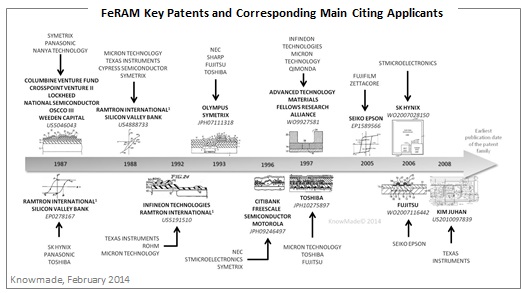 Hundreds companies/academics are involved in eNVM IP. Most of the major NVM players are present in the list of the top patent assignees. The report provides a ranking and analysis of the relative strength of the top eNVM patent holders derived from their portfolio size and patent citations Networks. Based on this portfolio analysis as well as on their market interest, we have identified 10 major players that are profiled in this report. Each profile includes a detailed portfolio analysis with the time evolution of patent filing, key patents, memory types, litigations, licensing, partnerships and strategy.