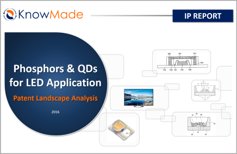 With fundamental patents expiring in the next years, how will evolve IP forces involved ?
Publication January 2016

Reshaping the LED phosphors industry at a turning point

The last 2 years have seen some major changes on the LED market with important boom of lighting applications and the growth of Chinese LED industry. On the phosphor front, nitrides are the dominant red phosphors for high CRI lighting and wide color gamut displays. Suppliers have proliferated despite IP restrictions. But a new material, Mn4+ doped PFS (potassium fluorosilicate) developed by GE and already manufactured by Denka, Nichia, GE and others could challenge the dominance of nitrides in display applications thanks to its extremely narrow band. Quantum Dots (QDs) have also emerged as highly credible options for displays thanks to design flexibility (adjustable emission wavelength) and very narrow band emission. YAG is the best yellow phosphor for white LEDs. But its use is restricted by strong IP owned by Nichia. Silicates are the best substitute but still lag slightly in performance. With critical IP to start expiring from 2017 and prices significantly lower than any alternative, we expect YAG to become ubiquitous by the end of the decade and silicate to decrease significantly unless breakthrough in performance and cost are achieved. Phosphor IP is a major force in LEDs and contributed heavily in shaping its industry with more than 70 litigation cases involving around 50 companies. The LED industry keeps bracing for the expiration of many fundamental patents. This could help relative newcomers such as Chinese LED packaging companies expand their market overseas. In the meantime, Everlight has been accentuating its effort to invalidate most of Nichia’s fundamental patents and Osram and Nichia have continued strictly enforcing their IP via multiple litigations while the BOSE consortium has expended its licensing program for Silicate phosphors to various Chinese LED packaging companies.
More than 7,510 patented inventions related to Phosphors & QDs have been published worldwide up to September 2015. The first patents were published by Japanese companies (Mitsubishi, Toshiba, Nichia, NIMS, Panasonic…). But patenting activity really took off over the 2003-2007 period after development of first high brightness GaN-based blue LED from Nichia. A second wave of patent publications started in 2010, mainly originating from AOT, Samsung and Stanley Electric. The increase in patent publications focused on Phosphor Composition follows same trend although more slowly. Chinese LED phosphor players such as Sunfor Light have recently entered the LED Phosphors & QDs IP arena.
Overall, patent filings peaked in 2013, and have been slowing down since. Meanwhile, granted patents worldwide should increase after successful processing of the numerous pending patent applications. We expect patent filings to continue driven by innovation in nitride phosphors or new compositions such as Mn4+ activated phosphors or QDs that haven’t reached their technology maturity yet and for which adoption in commercial applications such as displays is just starting.

More than 200 patent applicants are involved in Phosphors and QDs for LED. Most of the major LED and Phosphors manufacturers are present in the list of the top patent applicants, including Nichia, Cree, Osram, Philips, Toyoda Gosei, Samsung, LG and Seoul Semiconductor. The report provides a ranking with all major LED and phosphor manufacturers present and analysis of the relative strength of the key patent holders derived from their portfolio size, patent citations networks, countries of patents filings, current legal status of patents. Many key players are being challenged as their fundamental patents are approaching their expiration dates. To  keep  fending  off  new  entrants, leading LED makers will increasingly have to rely on more recent applications, including continuations of those fundamental patents belonging to the same  families. Panasonic leads patents assignees for LED with wavelength converters and ranks 7th in patents citing specific phosphor compositions. While not usually perceived as a leading LED player, the company is very active in LED R&D, including in the development of new phosphor compositions. But its LED related portfolio extends beyond phosphor related inventions. This broad portfolio allows the company to operate relatively freely in the LED space. Similarly, Toshiba shows a strong IP related activity despite a relatively moderate revenue position within the LED industry. It remains to be seem how the company’s recent decision to exit the white LED business will impact its overall LED lighting strategy. 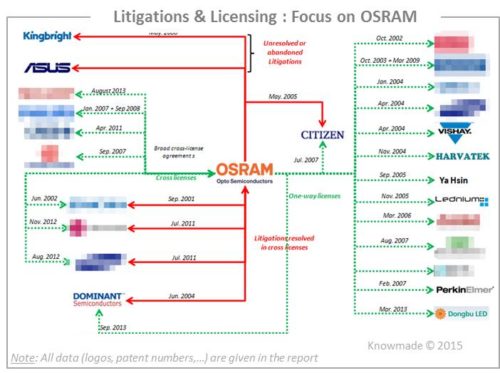 The 7,510+ patented inventions selected for this study have been manually categorized by technology segment. The existing Phosphor & QDs for LED applications IP include LEDs using phosphors or QDs, phosphors compositions, QDs and LEDs with remote configuration patents. A special focus is provided on phosphors compositions (in particular for nitrides and new compositions) , QDs, free-Cd QDs and Chinese players. Nichia and Osram lead in garnet compositions. Both had fundamental patents filed in 1996 regarding YAG, TAG and multiple other garnet phosphors. They are followed by Philips and Mitsubishi. Some other players are leading the Silicates/Orthosilicates segment. However, the strongest composition patents in this category of materials belongs to the BOSE consortium including Litec/Merck, LWB, Toyoda Gosei. The Nitride / Oxynitride sections are dominated by Japanese players. Others big companies also own some IP on nitride compositions. Beside, other assignees on the list mention the use of Nitrides with LEDs but, for the most, haven’t developed compositions themselves. Among the phosphor makers, six companies are the most active in developing other compositions. In China, the most active companies/universities researching phosphor compositions are mostly focusing on Nitrides but also on new compositions such as Europium activated Molybdates, Vanadates, Chlorine Borates, Tungstates and Antimonates. 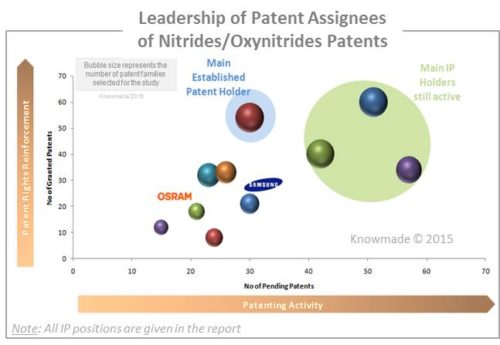 IP will keep playing a considerable role in this industry restructuring. In our analysis, we have identified various key players: Nichia, Cree, Osram, Philips, Seoul Semiconductor, Mitsubishi, …. Thus, we provide a complete and deep understanding of IP litigation history including litigated patents families and most cited patent families in litigations. The analysis include litigation strategy and licensing agreement focused on Garnet, Silicates and Nitrides phosphors compositions. For each key players, litigations and licensing are examined with granted fundamental patents near expiration dates. We have identified key patents which could provide significant returns to their owners, in terms of market share, freedom of exploitation and additional revenue stream from royalties.

Our report also includes an Excel database containing all of the analyzed patents (7,500+ patent families). This database allows for multi-criteria searches and includes patent publication number, hyperlinks to the original documents, priority date, title, abstract, patent assignees, technological segments and legal status for each member of the patent family.

Companies cited in the report (non-exhaustive)