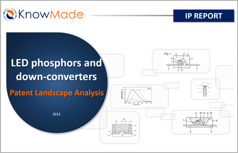 Phosphor related intellectual property has been and remains a major driving force with strong impact on the shape of the LED industry.
Publication Sep. 2013 Make sure you know what a patent landscape is by reading our full definition of the concept. 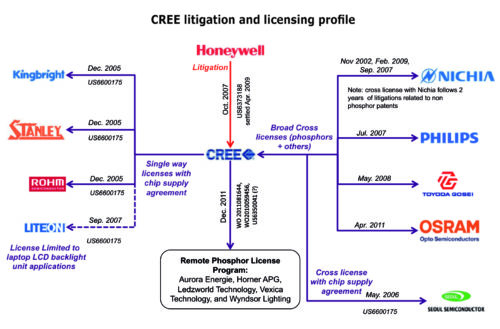 The first commercial GaN-based blue LEDs were produced in Japan in the mid 90’s after researchers Shuji Nakamura at Nichia and Professor Akasaki at Nagoya University (IP assigned to Toyoda Gosei) succeeded in removing some of the major remaining roadblocks associated with this technology (p-doping, epitaxy quality…). Quickly leveraging on this success, some fundamental patents describing the use of a blue LED combined with a phosphor to produce white LEDs were filed by Nichia, Osram, ATMI and others. Those fundamental patents were rapidly followed by a fast growing number of applications through 2005 as an increasing number of companies started to compete in the LED market and new applications in cell phone, laptop and LCD TV display, and general lighting were being addressed. Phosphor IP is a major force in the LED industry. With more than 40 litigation cases, it is also used as leverage by companies which have negotiated close to 70 licensing and supply agreements to date. It can also be argued that in the first half of the 2000 decade, the strict enforcement and lack of license grants for some fundamental IP related to the design and manufacturing of white LEDs might also have slowed down the progress of the industry by preventing more efficient competition that would allow prices to decrease. The report identifies the key players with the most relevant IP. It provides an overview, of phosphor related IP litigation and licensing, that has shaped the industry since the mid 90s, as well as a detailed analysis for the major players involved.

A vast number of relevant patents

Our search strategy combines automated and manual screenings that have led to the selection of more than 4,500 relevant patent families. Those have been segmented by type (composition patent or phosphor configuration patents) and organized in various technology segments that are analyzed in detail: garnets, silicates, nitrides and oxynitrides, quantum dots. The report also includes a special focus on the emerging LED phosphor IP in China. For each segment, the report provides a detailed analysis including the time evolution of patent filings, identification of the key players, collaborations and citation networks, as well as the identification of the key patents based-on citation and impacts in litigations. The report also includes a companion excel database with all patents of the company profiled in the report. This database includes abstracts and hyperlinks to the original documents and allows multi-criteria searches (patent publication number, priority date, title, applicants, technological segments…). 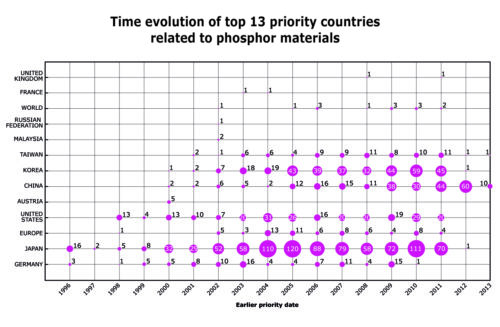 Hundreds of companies are involved in LED phosphor IP. Most of the major LED players are present in the list of the top patent assignees. But independent phosphor manufacturers like Intematix or Mitsubishi that are offering their phosphors on the open market are also emerging as major forces in the IP landscape. Leading Taiwan based packagers are notably absent from this ranking. This weak position explains the large number of litigations and one way, royalty or supply based license agreements involving those companies. The report provides an analysis and ranking of the relative strength of the top Led phosphor IP holders derived from their portfolio size, patent citations networks, number of family etc… Based on this portfolio analysis as well as on their litigation and licensing history, we have identified 15 major players that are profiled in this report. Each profile includes a detailed portfolio analysis with the time evolution of patent filing by segment as well as a list of key patents, citations, collaborations, litigations and licensing.

Composition focus shifting from yellow to red and green phosphors

With high performing silicates now widely available as a YAG substitutes for yellow emission, the focus on new composition development and patent protection has mostly shifted toward red and green converters. The market for those new phosphors and some of themost critical IP are currently dominated by Mitsubishi and Denka, which have acquired nitrides and oxynitrideslicenses from NIMS. However, many other players are also developing nitride and oxynitride compositions, including Intematix, Beijing Yuji and Lightscape (now dow electronic materials). New material families are also considered as promising phosphors including Tungstate and Molybdates as well as Fluorides championed by GE. Following recent progress in thermal stability and manufacturability, quantum dot are also finally emerging as a credible option. Because of their narrow emission bands, LCD display is the most promising application for the technology. In lighting, the use of red QD in combination with standard phosphor could emerge in remote phosphor applications.