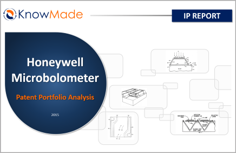 Will Honeywell continue to lead the Microbolometer patent landscape with the evolution of a new consumer market ?
Publication July 2015 More patent reports about MEMS, sensing and imaging technologies. If you’re wondering what the difference is between a patent portfolio and a patent landscape, read our definitions. 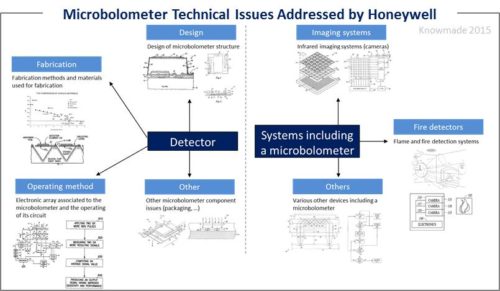 The microbolometer portfolio of Honeywell is cited by more than 300 patent assignees in more than 600 patent families. For its part, Honeywell cites 325 patent families in its portfolio, representing around 250 assignees. Combining the Citations Network with the analysis of the content of citing/cited patents, the IP competitors of Honeywell in the microbolometer domain have been ranked in order to establish a general view of the IP Competitive Environment. Thus IP competitor developing microbolometer technologies have been identified.

Key patents have been identified based on several indicators, including family size, legal status, citations analysis and impact on microbolometer technology. Patents recently expired and patents expiring in the next few years have also been analyzed. About 10 keys patents have been identified, some of which will expire in the next 3 years, thus the technology disclosed will be free to be used. Our report also includes an Excel database containing all of the analyzed patents. This database allows for multi-criteria searches and includes patent publication number, hyperlinks to the original documents, priority date, title, abstract, patent assignees, technological segments and legal status for each member of the patent family. 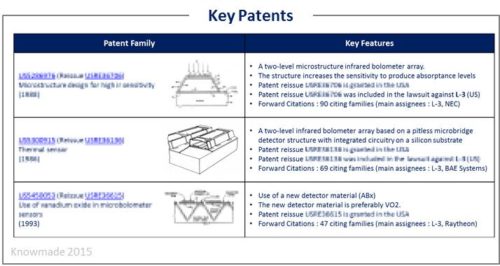