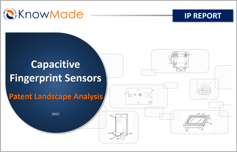 New strong IP enthusiasm and new players such as Apple are leaving their imprint on the market
Publication Jan. 2015

The report provides essential patent data for fingerprint sensors of the capacitive type including: The 650+ patent families selected for this study have been manually segmented by applications. About 80% of those families disclose a device comprising a sensor and the main applications for sensors of the capacitive type are Ic cards and electronic devices. Thus capacitive fingerprint sensors are developed to be compatible with such devices. Key features are the size and the thickness of the sensor as well as swiftness and convenience for the user. Currently two types of sensors are developed : touch and swipe sensors.

More than 15 companies are deeply involved in capacitive fingerprint sensing IP. Key players include electronics companies, semiconductor manufacturers, mobile device providers, fingerprint sensor component providers. The report provides a ranking and analysis of the relative strength of the top patent holders derived from their portfolio size, patent citations networks, countries of patents filings, current legal status of patents. Through this thorough analysis, we have identified 15+ major players, each of which is profiled in this report. Each profile includes a detailed portfolio analysis with patent activities, key patents, impact of portfolio, granted patents near expiration and IP strategies.

The business sector of capacitive fingerprint sensors has been subject to different mergers and acquisitions, reshaping the IP network. In the last couple of years, new IP challengers appeared in the field and the leadership of patent applicants should evolve in the future. Our report also includes an Excel database containing all of the analyzed patents. This database allows for multi-criteria searches and includes patent publication number, hyperlinks to the original documents, priority date, title, abstract, patent assignees, technological segments and legal status for each member of the patent family.