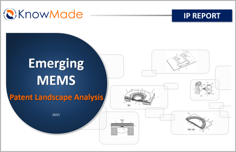 This report is a patent landscape. Read our page for all the information on this specific patent analysis.

Our range of MEMS, sensing, and imaging patent landscapes. Patent activity related to eMEMS began in the 1990s and we observe a takeoff of patent publications for AutoFocus (AF), scanning micro-mirrors and ultrasonic MEMS technologies since the mid-2000s. MEMS AF patent activity is new, but has increased since its emergence in 2009. This period also corresponds to the growth of the CMOS image sensor market for consumer applications, requiring more compact camera modules with more functionalities. Cambridge Mechatronics and DigitalOptics are currently the leading patent holders, but Korean giant LG has become a major force since 2010. Today MEMS AF is still a hot topic especially for cell phones and tablets, but wasn’t adopted in 2013. Although MEMS AF has promising market potential, it still faces strong market and technical challenges, which might explain the increasing patent activity of recent years. Scanning micro-mirrors have driven a significant number of patent publications since 2003, peaking in 2009-2013. Many companies are doing development to compete with Texas Instruments’ (TI) leading DLP technology, which is a MEMS micro mirror array. TI and Microvision are the main patent applicants and both are shipping MEMS-based scanning micro-mirror products. TI holds many granted patents and has a strong IP portfolio but, whereas Microvision is becoming a major force in the IP landscape, TI has been inactive since 2010. New companies Hitachi, Lemoptix and Funai Electric have been trying to enter this IP arena since 2009. We believe the value for scanning mirrors should be important in the next few years and picoprojectors are expected to bring further growth to MEMS mirrors within a few years.Patent applications for ultrasonic MEMS have increased greatly in 2013, which may correspond to a market need in medical imaging. This application will really grow in coming years, and is expected to reach the market in 2016 in niche applications. Siemens, Philips, Olympus and General Electric are currently the main patent applicants, but Kolo Technologies and Samsung are challenging them. Other eMEMS segments show less patenting activity. Most AOC MEMS patents were filed in 2002-2004, after the telecom downturn of the 2000s, due to an over-estimated market demand. Xerox, Agilent Technologies and Avago Technologies have been inactive since the mid-2000s, but new IP challengers such as Luxtera and Kaiam are emerging and today offer Si photonic devices.
Patent publications for chemical sensors seem to have restarted after a first peak in 2005. Europeans like Sensirion, Cambridge CMOS Sensors and Bosch and Americans like Honeywell are dominating the patent landscape, but Chinese academics have increased their patenting activity since 2010. Numerous manufacturers are working on CO2 sensors for environmental applications, and much R&D focuses on CO2 sensors for the HVAC market. Today 100% of CO2 sensors for indoor air quality are based on NDIR (Non Dispersive IR) sensors but high levels of R&D and patent activity suggest MEMS could enter this market soon. MEMS-based chemical sensors have strong, long term potential due to the future development of the “Internet of Things”. MEMS-based micro speakers could be a real breakthrough as this technology could give new functionalities to sound transmission and compact speakers. Patent activity was almost non-existent before 2007 and increasing patent activity since 2009 is mainly due to Audio Pixels and Bosch. MEMS speakers are still a hot topic in the industry but unfortunately we do not see any commercialized products at the moment. Audio Pixels and Knowles are the only companies communicating about MEMS speaker products. The MEMS speaker market is expected to start in 2015 and companies already involved in speakers are expected to reach the market first.
Patent publication related to Silicon-based microfluidics is low but steady over the past 10 years, showing it is of interest. Most patents are held by American academics such as Caltech, NIH and University of California that may represent licensing opportunities. Boehringer, Life Technologies/Thermo Fisher, Silicon Biosystems, and Oxford Nanopore are developing microfluidics devices but seem not to hold patents specifically focused on silicon-based technologies.

No dominant player in the emerging IP mems landscape

Our analysis shows a wide diversity of business models among the players currently applying for patents covering emerging MEMS devices. No current big MEMS player has patents in all the different emerging MEMS segments we have covered. ST Microelectornics (STM) is one of the rare companies having patents for different devices, in micro speakers and Si microfluidics. For other devices, most of the patents are held by companies who are startups, such as poLight and Cambridge CMOS, or big IC players without significant MEMS activity, like LG and Samsung.
Most of the MEMS market value is today in the hands of a few big players, including Bosch, STM, Knowles and Texas Instrument (TI). These companies will likely enter the emerging MEMS markets in the future as they can provide high volume manufacturing (HVM). Indeed, access to HVM is an entry barrier to market success. So, for the companies not present in the MEMS landscape today but having patents on emerging devices, market access will go either through partnerships with MEMS foundries (e.g. poLight with STM) or through acquisition. This patent investigation covers patents published worldwide until June 2014. Our search strategy combines automated and manual screening that has led to the selection of more than 1,300 patent families. For each eMEMS segment, the report provides a detailed analysis including the time evolution of patent filings, identifying key players, collaboration networks, degree of specialization and leadership of main players, as well as identifying key patents. More than 250 industrial/academic patent applicants have been identified, and for most eMEMS segments we note differences compared to the well-known players. Taking into account their portfolio size, patent citation networks, country of patent filing and current legal status of patents, this report provides a ranking and relative strength of the top eMEMS patent holders. More than 80 key patents have been identified based on several indicators, including family size, legal status, citation analysis and impact on eMEMS technology. The report also includes an Excel database with all patents analyzed in the report. This database allows multi-criteria searches and includes patent publication number, hyperlinks to the original documents, priority date, title, abstract, patent assignees, eMEMS technology and legal status for each member of the patent family.