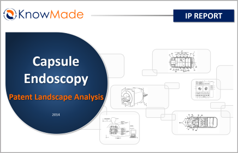 Olympus and Given Imaging are leading intellectual property in the capsule endoscopy industry, but for how long?
Publication Aug. 2014

Other reports on healthcare technologies with KnowMade’s 15 years of expertise in producing patent landscape.

The global capsule endoscopy systems market is expected to show a significant growth with the rise in aging population who require much medical care. However, since 2009, the number of new patent applications are decreasing. As the industry matures, there’s less and less room for breakthrough innovation and fundamental patents that could shape the industry. In such conditions, we can expect an increase in patent cross-licensing agreements, acquisitions (e.g. Covidien acquisition of Given Imaging) and litigation between the industry players in the next few years. Capsule endoscopy is a medical procedure which has revolutionized endoscopy as it has enabled for the first time a painless inspection of the small intestine. The procedure was unveiled in 2000 and is based on a vitaminsize pill which captures images of the digestive tract while it is transported passively by peristalsis. The device consists of an image sensor, an illumination module, a radio-frequency transmitter and a battery. In a quantitative point of view, the main patent applicants are Olympus and Given Imaging which have a large wide lead over their competitors. However more than 30 companies and academics are involved in capsule endoscopy IP. Siemens and Hoya are becoming major forces in the IP landscape and other capsule endoscopy pure players are also present, such as Intromedic, Capsovision, Innurvation or Shenzen Zifu Technology. Over 20 granted patents are expected to expire over the next 5 years (among them first capsule endoscopy US patent in early 2015). As some of the most fundamental patents are set to expire in the next few years, we expect the capsule endoscopy IP wall to become weaker. Moreover, differentiation opportunities remain and the development of any new technologies with disruptive properties (e.g., magnetic guidance system or therapeutic capsule endoscopes) could still provide significant benefits to its inventor.

What is the future for capsule endoscopy IP?

In the past few years capsule endoscopy opened the chance to conduct in a non invasive way diagnosis of a wide range of pathologies of the digestive tract. Since 2010, the number of patent filings has decreased, which suggests that the economic growth was driven by patented technologies rather than new innovation. In such conditions, we can expect an increase in the patent lawsuits. However, in the near future, IP capsule endoscopy could be focused on robotics and bioMEMS. Robotics will significantly contribute to make capsule endoscopy autonomous devices capable to bring a set of bioMEMS in targeted areas of the gastrointestinal tract, independently from an external operator. Currently, patents on in vivo microrobots for endoscopy are mainly filed by universities and extensive work is required for these to become clinical reality. These new integrated technologies may re-dynamize patent activities in capsule endoscopy, with the apparition of new players, probably mainly located in Asia. 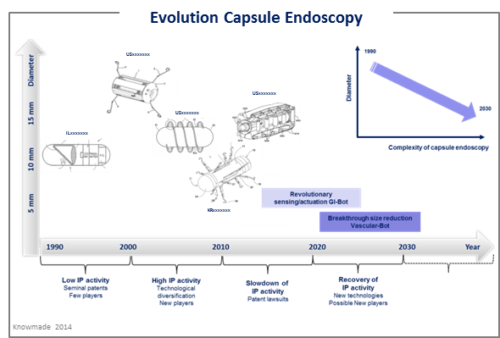 More than 1,800 patent families related to capsule endoscopy field have been published worldwide up to July 2014. In the early 1990s, Given imaging and Olympus filed the first concepts of capsule endoscopy for improving endoscopy. Those fundamental patents have been followed by an ever increasing number of patent applications since 2001 as more companies competed in capsule endoscopy to meet the technological challenges, the market demand and to lower manufacturing costs.