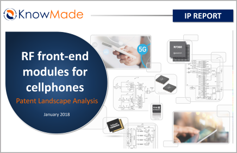 RF front end module ip dynamic: an indicator of the race toward the 5G