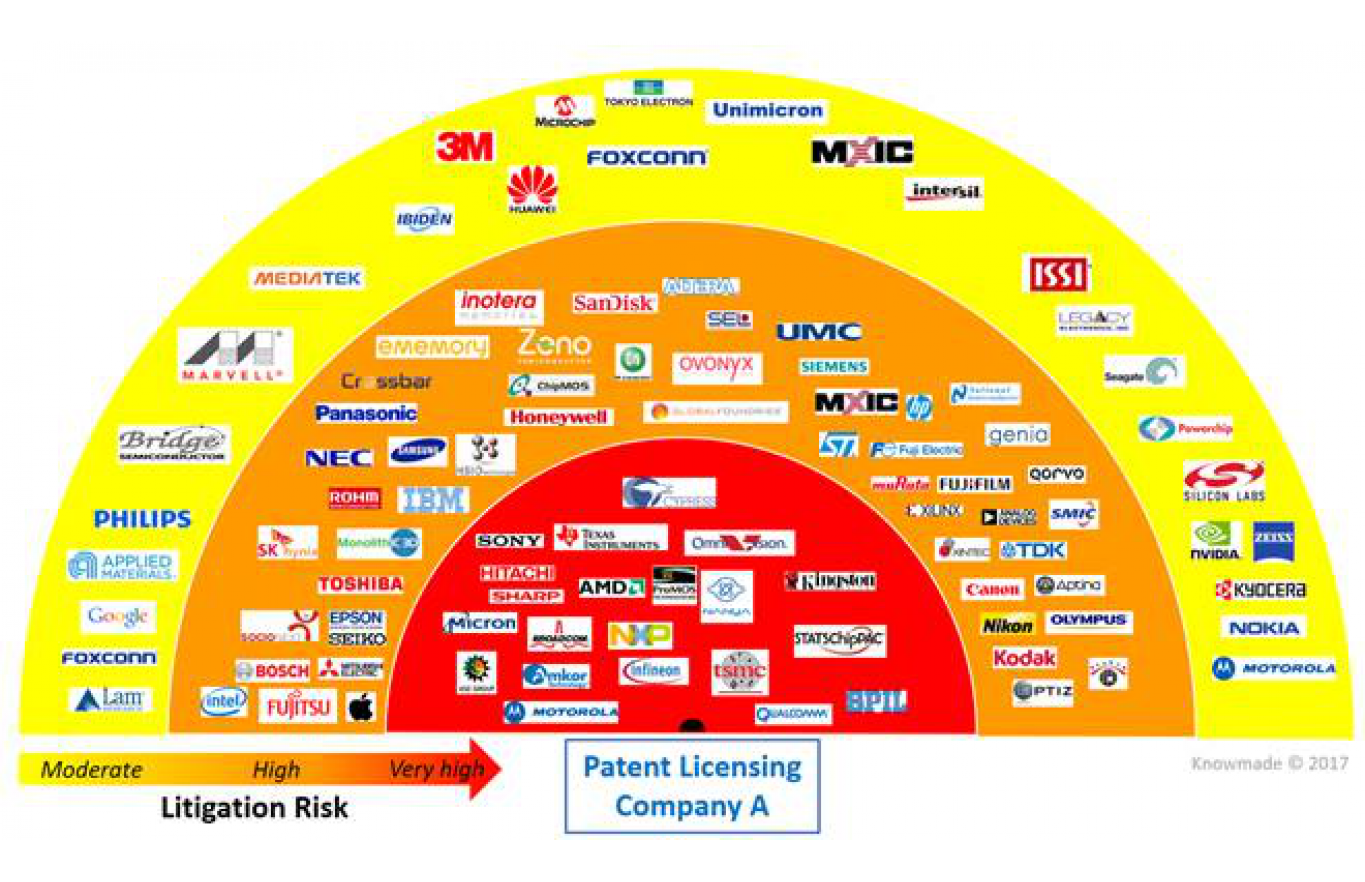 The semiconductor industry has all the attributes that appeal to patent licensing companies (PLCs): Are you in their sights?
Publication February 2017

PLCs will increasingly extract cash from the semiconductor industry

Patent Licensing Companies (PLCs) are non-operating companies concentrated on creating the majority of their income from licensing patents to or litigating against operating companies suspected to infringe their patent rights. Other related terms include non-practicing entities (NPEs), patent holding companies (PHCs), patent monetization entities (PMEs), patent assertion entities (PAEs) and Patent Trolls. PLCs commonly acquire their patents from other companies, and then monetize them via aggressive patent litigation. Some PLCs have R&D activities in order to generate their own patents, and they monetize them by licensing. The RPX Corporation’s March 2015 report states that “NPEs cost operating companies an estimated $12.2 billion in both legal fees and other legal costs and settlement or judgment amounts in 2014”. Patent Licensing Companies operate in fields with high probability of patent infringement, mainly in USA, where litigation damages are much higher than in Europe or Asia. In a patent infringement action, the potential sales volume plays a major role for assessing the damage award. Thus, the PLCs come into action when the market has reached a critical size and target companies have made irreversible investments. Patent litigation risk tends to increase as new technologies emerge, or as existing technologies combine to create new products and services. The convergence of technologies in the semiconductor field leads to an increase in patent litigation in that sector. The semiconductor industry brings together all ingredients to appeal to PLCs. These include strong consolidation, with many mergers and acquisitions (M&A), numerous patents for sale from bankrupt companies and M&A, complex patented inventions, the colossal amount of products embedding semiconductor devices, big companies, and a lot of money. All companies designing, manufacturing or marketing semiconductor-based products are potential targets for PLCs’ next patent litigation.

This report provides an in-depth analysis of patent litigation filed by PLCs involved in the semiconductor field, including the dynamics of US patent litigation, defendants, accused products and the current status of the litigation cases. We have evaluated both the aggressiveness and the litigation risk from each PLC. According to our analysis, seven PLCs may be considered as major threats to practicing companies involved in the semiconductor market: WiLAN, Acacia Research, Conversant IP Management, Intellectual Ventures, Rambus, Round Rock Research and Tessera. Some of them have shown strong patent enforcement activity since 2014, and they will continue to aggressively enforce their patents against semiconductor players over the next few years.

Many industrial companies at every level of the semiconductor supply chain, including integrated device manufacturers, outsourced semiconductor assembly and test companies, and equipment and material suppliers are potential targets for Patent Licensing Companies. For each PLC, we provide a detailed IP profile of their recent patent acquisitions in the semiconductor field, including:
– Patent acquisition dynamics
– Patented technologies, including memory, transistor, sensor, radio frequency and power devices, manufacturing, and packaging
– Remaining lifetime of the patent portfolio
– Latest patent litigation, including which companies have been sued for patent infringement, accused products and current status
– Potential targets by technical segment: the main companies facing the highest risk of patent litigation regarding patents owned by the PLC.