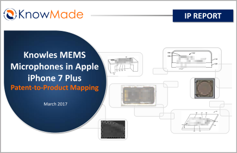 What are the main patented features of Knowles’ MEMS Microphones in the iPhone 7 Plus?
Publication April 2017

System Plus Consulting tore down the MEMS microphones of Knowles included in Apple’s iPhone 7 Plus, launched in September 2016. Knowmade then compared the features revealed to Knowles’ IP portfolio. The selected features are mainly related to the microphone package, diaphragm and backplate, which uses Knowles’ free-floating technology. The report identifies key patents held by Knowles related to these technology features. For each product feature, we have established links between patented technologies, including legal status.

We have analyzed Knowles’ patents related to MEMS microphones found in the Apple iPhone 7 Plus, including publication trends, country of publication, main inventors, and identified IP competitors. The analysis of forward and backward citations shows that Knowles’ portfolio is cited by many patent applicants. Combining   the   citation network with analysis of the content of citing/cited patents, we have ranked Knowles’ IP competitors to establish a general view of the IP competitive environment. Knowles has filed patent infringement litigations related to only two patent families of its portfolio. Both families are related to MEMS microphones and to features identified in this patent-to-mapping report. Knowles has filed complaints against six different defendants, including its main IP competitors. The technologies claimed in these patents are key for Knowles.