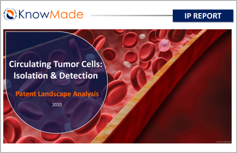 What technology will make up the next FDA-approved CTC device? What kind of player will supply it: a newcomer, an established company or will a future acquisition change the game?
Publication February 2020 • PDF with > 160 slides
• Excel file > 5,500 patents
• IP trends, including time-evolution of published patents, and countries of patent filings
• Patents’ legal status
• Ranking of main patent assignees
• Key players’ IP position and relative strength of their patent portfolios
• Summary of the IP related to the physical isolation: size, deformability, electrical charges or density.
• Summary of the IP related to the biological isolation: positive or negative enrichment.
• Summary of the IP related to the CTC detection: nucleic acid, protein or functional assay.
• Analysis of patent litigations and review of key patents.
• Excel database containing all patents analyzed in the report, including biological and physical isolation and detection segmentations

CTC isolation and detection, an essential step in cancer prognostic and personalized treatment

Cancer is the second leading cause of death worldwide and was responsible for an estimated 9.6 million deaths in 2018. Globally, about 1 in 6 deaths is due to cancer (source: WHO). One defining feature of cancer is the rapid creation of abnormal cells that grow beyond their usual boundaries, and which can then invade adjoining parts of the body and spread to other organs. The latter process is referred to as metastasizing. Metastasis is a major cause of death from cancer. Preventing or detecting metastasis outbreak has therefore become a main issue in cancer prognostic (to predict the development and the outcome of the cancer) and in personalized treatment. The discovery of circulating tumor cells (CTC) was a milestone in understanding tumoral progression, and their presence in the blood enables a less invasive biopsy (liquid biopsy) which is beneficial for the patient. Then, the development of devices to intercept and analyze these rare cells steeply increased in the last 10 years, as did the number of companies supplying them (e.g. Menarini Silicon Biosystems, GPB Scientific, Gilupi, Epic Sciences). However, this development seems to be slower than in other sectors, like the free circulating DNA area, and certain key facts could explain this lower progression. First, CTC are hard to transport and store, because cell integrity is difficult to maintain. To counteract this issue, most companies develop instruments which can be directly sold to end users, but they are expensive and complex to manufacture. Then, the transfer from laboratories to clinical practice is full of obstacles, like the complexity of clinical trials or the difficulty in getting authorization from administrative bodies (e.g. the FDA). However, understanding of CTC and technology to isolate them are advancing quickly. Monitoring these rare cells as a prognostic tool among patients is an increasingly confirmed practice, as is the significance of fully characterizing a cell to enable personalized treatment. CTC isolation & detection interests big companies and start-ups alike, and it is crucial to understand the intellectual property position and strategy of these different players. Such knowledge can help detect business risks and opportunities, anticipate emerging technologies, and enable strategic decisions to strengthen one’s market position.

The analysis of the time evolution of patent publications shows that CTC isolation and detection started to be investigated in the late 1990s with a first patent filed in 1995 by Dendreon (company acquired by San Power in 2017). Until 2009, there is a latent period, even if big pharmaceutical companies and some academics begin to take interest in CTC. From 2010 to 2016, an acceleration is observed with big newcomers (Nestlé, Samsung, Siemens or Hitachi Chemicals). In 2016-2017, publications stagnated despite the arrival of new players. The main patent assignees are US industrial players that develop an international intellectual property strategy. Europe and China are the main countries of protection, which appear to be strategic territories for these applicants. CTC could be isolated and detected using various methods. Therefore, a technological segmentation was made in this IP landscape, as follows:
• CTC isolation: Efficient enrichment of CTC can be achieved by approaches that exploit differences between tumor cells and blood cells, including the differential expression of cell surface proteins or distinct physical properties of the cells.
– Physical isolation: Assays are based on CTC physical characteristics including size, deformability, density and electrical charge.
– Biological isolation: It is protein-based methods which rely mainly on specific markers that are detected by antibodies or by other particles like aptamers. The sample can be enriched in desired cells (positive isolation) or depleted in unwanted cells (negative isolation).
• CTC detection: Once CTC concentration is increased, for an unambiguous isolation of CTC, detection methods are necessary.
– Nucleic Acid: DNA or RNA are identified by RT-PCR, FISH, etc.
– Protein: Surface markers are detected by antibodies (anti-EpCam, Anti-Cytokeratin, etc.) and visualized by microscopy, FACS, etc.
– Functional assays: EPISPOT or invasion assays.
• Other technologies: Raman spectroscopy, surface acoustic waves or the use of virus or phagocytic cells, etc.
• Medical devices: In vivo apparatus like an implantable device or apheresis.

Identifying the companies that have recently emerged in the IP landscape

Among the players that have filed patents related to CTC isolation and detection, over 60 newcomers were identified. These companies are established companies and startup firms developing their first products in the CTC area. These technologies are mainly related to CTC positive enrichment, size-based isolation or nucleic acid detection. Numerous IP newcomers are based in Asia and in the US while some are based in Europe. It is possible that one of these innovative companies could become one of the next healthcare unicorns that the big corporations will be tempted to acquire.

This IP study includes selection and description of key patents. The key patent analysis includes the legal state of the family for each of the main territories, the number of received citations, the review of the main claim(s), the description of interesting features about the innovation disclosures and relevant figures illustrating how the innovation works. The description also contains information about the fact that the patent family was involved in a patent litigation in the USA.

Moreover, the report also includes an Excel database with the >1,680 patents analyzed in this study. This useful patent database allows for multi-criteria searches and includes patent publication numbers, hyperlinks to the original documents, priority dates, titles, abstracts, patent assignees, each patent’s current legal status and segmentation to which it belongs.