SOPHIA ANTIPOLIS, France – May 6, 2019: Nanopore sequencing is one of the next-generation sequencing (NGS) technologies believed to be capable of revolutionizing DNA analysis. Nanopore sequencing is performed using an electrical detection method, which generally includes transporting a sample through the nanopore, which is immersed in a conducting fluid, and applying electric potential across the nanopore. Electric current resulting from the conduction of ions through the nanopore is measured. The magnitude of the electric current density across a nanopore surface depends on the nanopore dimensions and the composition of the sample, such as DNA or RNA, which is occupying the nanopore at the time. Different nucleotides cause characteristic changes in electric current density across nanopore surfaces. These electric current changes are measured and used to sequence the DNA or RNA sample. Different modalities of nanopore sequencing have been developed over time, including protein nanopores, solid-state nanopores, and hybrid nanopores. The technology enables production of ultra-long reads at very high speeds, reducing sample preparation time as well as the data-processing time required to reassemble the reads into their original sequence. Solid-state nanopores are cheaper to produce as they are formed by drilling a nanometer-sized hole in an inorganic substrate. Silicon-derived substrates played an important role in the early development of solid-state nanopores. Indeed, using these substrates allowed to manufacture solid-state nanopores with conventional semiconductor processes (electron/ion beam sculpting, etching). These substrates are also interesting when the electrical detection method is used because they allow to form the electrodes with well-known processes (e.g. serigraphy, lithography). Another interesting feature of solid-state nanopore is its rigid structure preventing the nanopore from moving on the substrate surface. 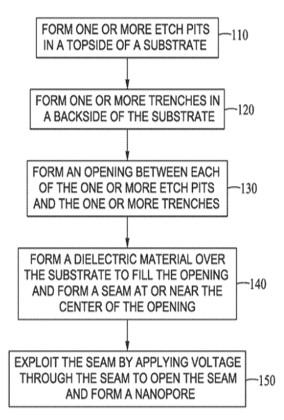