SOPHIA-ANTIPOLIS, France – July 22, 2020 | On July 8th, 2020, Allos Semiconductors disclosed a deal with Azur Space, a company specializing in the development and production of multi-junction solar cells, to sell its GaN RF and power electronics business, in a view to focus on its GaN-on-Si micro LED epiwafer technology for up to 300 mm. Azur Space is a new entrant in the power electronics business; in fact it has no preexisting intellectual property (IP) assets related to GaN-on-Si epitaxy and power GaN device technology, but it does have the ability to leverage its manufacturing expertise and facilities for high-volume production with a relatively limited initial investment (10 million euros).
Since the very beginning and its foundation in 2014, Allos Semiconductors has made its epiwafer technology – inherited from Azzurro Semiconductors – available through licensing and technology transfer to “high-power electronics companies that would like to enter the GaN-on-Si sector and avoid the cost, risk and uncertainty of starting their own epi development from scratch”. In other words, Allos Semiconductors would enable new players to safely enter the GaN-on-Si business, relying on Allos’ patented and proprietary growth techniques and epi-structures.
In 2017, the licensing & technology engineering firm further strengthened its value proposition by disclosing a carbon-doping-free GaN-on-Si technology, offering good dynamic resistance, good crystal quality and extremely low leakage current all at once, thereby enabling customers to overcome the usual trade-off between these parameters when using carbon doping in epi-structures. Moreover, it would provide an effective way for customers to avoid conflicts with well-established IP competitors relying on carbon doping to achieve the power electronics industry’s requirements. As of 2017, Allos Semiconductors’ approach was based on the insertion of multiple interlayers in an unintentionally doped thick GaN buffer layer (Fig. 1). To our knowledge, neither Allos nor Azzurro has filed patents describing such a structure, or how to design and grow the interlayers in order to effectively reduce the leakage current in high-voltage applications. 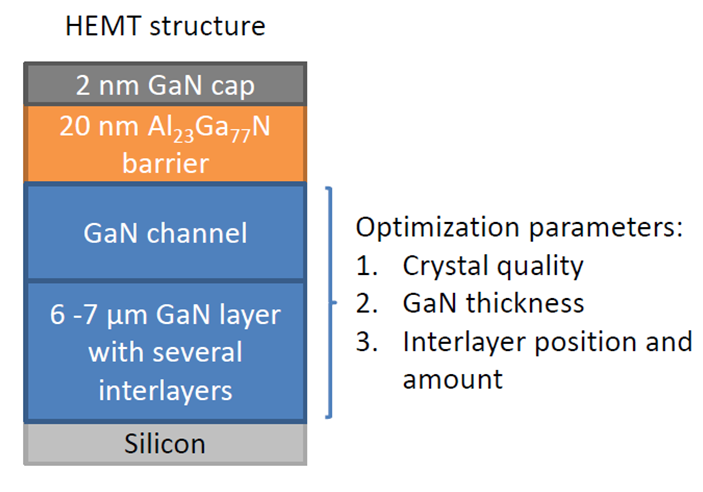 Figure 1: Typical GaN-HEMT epi-structures grown by MOCVD without intentional carbon doping or other doping. Electrical performance is optimized by position and number of interlayers. Source: ‘Low vertical leakage current of 0.07µm/mm2 at 600V without intentional doping for 7µm-thick GaN-on-Si’ presented at ICNS-12 in Strasbourg, France (July 2017)