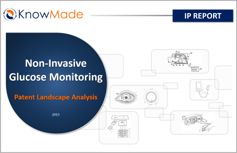 With the entry of new companies, such as Google, the field of non-invasive glucose monitoring is expected to grow rapidly, with new innovative and accurate devices
Publication September 2015 The patent landscape for non-invasive glucose monitoring is really rich, involving many players exploring various technical approaches, such as IR spectroscopy, photoacoustic or impedance. It includes more than 1,600 patent families filed and involves over 500 applicants. With 387 million people concerned worldwide by diabetes in 2014 (International Diabetes Federation) and an ever growing number of diabetics, the market related to diabetes management is considerable and very attractive. The global glucose monitoring device market is estimated to reach $14,2 billion by 2019 by Mordor Intelligence. To this date, the conventional technique to measure glucose still involves drawing blood (finger pricking), which can cause pain and discomfort for the patient. Hence, the need to find a non-invasive technique to monitor glucose. Many companies have tried to develop non-invasive technology and device for glucose monitoring, but so far with no success. A few devices had obtained approval from the authorities in the USA or Europe before being abandoned : GlucoWatch (Cygnus), Pendra (Pendragon Medical), NBM-200G (OrSense) or HG1-c (C8 MediSensors). Recently, Integrity Applications received the European CE Mark and launched its GlucoTrack DF-F device late 2014 in Europe. While several minimally-invasive devices are now commercially available, bringing to the market a totally non-invasive device would represent a great change for the market and the diabetics. The renewed IP interest for this topic observed recently shows the desire of players to overcome the same cause of failure faced in the last 3 decades, reliability and accuracy of the technology. The IP and the market for non-invasive monitoring of glucose are driven by the ever increasing diabetic population around the world as well as the recent sizeable democratization of wearable sensors for health monitoring. The spectrum of technologies investigated to monitor glucose non-invasively is very broad. Spectrometry is the most trendy technology. Spectrometry regroups various techniques, but they don’t all receive the same focus. The spectrum of sample targets studied to perform a non-invasive measurement is also really broad. The detection of glucose level at the skin level or in the blood vessels are the most investigated. But techniques allowing a detection at the level of the eye are also considered and a new comer in the non-invasive glucose monitoring domain is investing mostly in this approach.

Most main players are industrial companies, involved in the diabetes business or in the monitoring of various blood parameters. With many players and many technical approaches studied and no great success on the market yet, the non-invasive glucose monitoring IP domain is evolving regularly. The report provides a ranking and analysis of the relative strength of the top patent holders derived from their portfolio size, patent citations networks, countries of patents filings, current legal status of patents. Through this thorough analysis, we have identified 15 major players, each of which is profiled in this report. Each profile includes a detailed portfolio analysis with patent activities, key patents, impact of portfolio, granted patents near expiration and IP strategies. Many American and Japanese companies feature in the top-20 of the main assignee ranking for the non-invasive glucose monitoring technology. However, the analysis of the main current IP applicants shows that the IP landscape is changing, with companies changing their technology focus and others entering the domain. Moreover, academic applicants are filling more applications than in the past. The same way, several Chinese companies are also showing interest in the domain lately.

Key patents have been identified based on several indicators, including family size, legal status, citations analysis and impact on non-invasive glucose monitoring technology. This patent landscape shows that the major IP holders are not necessarily the most influent players in the domain. Several key patents filed by companies who have ceased their activity are still granted and have been acquired by others. The report also includes an Excel database containing all of the analyzed patents. This database allows for multi-criteria searches and includes patent publication number, hyperlinks to the original documents, priority date, title, abstract, patent assignees and legal status for each member of the patent family.