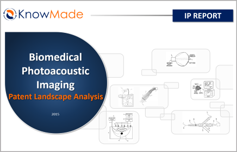 Japanese companies show strong interest recently in biomedical photoacoustic imaging but US academics own key patents and US companies are already on the market
Publication Mar. 2015

Photoacoustic imaging technologies in the biomedical domain are in full growth from an IP point of view, and have began to move in the clinical field. If Japanese companies Canon and Fujifilm are the main IP holder, the market is held by US actors : ENDRA Life Sciences, VisualSonics, Seno Medical Instruments, OptoSonics or TomoWave Laboratories. This patent landscape focuses on photoacoustic imaging in biomedicine. Photoacoustic imaging is a safe, non-invasive, non-ionizing imaging technique. The technique offers several advantages and represents a great alternative to traditional medical imaging approaches. The innovation of photoacoustic imaging for biomedical purposes is mainly driven by the need to enhance the efficiency of the detection and diagnostic of cancer. The photoacoustic imaging technologies involve more than 100 different applicants and more than 900 patent families related to photoacoustic imaging have been published worldwide up to January 2015. In the early 80s, the University of Arizona published the 1st patent transposing photoacoustic technology to biomedical imaging. But the technology only really emerged in 1997, especially after the publication of the patent introducing a time factor to the technology and thus allowing a three dimensional image reconstruction. Since 2010, a take off in the number of new applications is observed, indicating a strong and growing interest for the use of photoacoustic in imaging techniques. Photoacoustic imaging is a very promising technique for the medical field, especially for diagnostic and treatment cancers, and offers many advantages such as safety, great resolution, easy-to-use and low cost. Thus the number of new patent applications in the domain is expected to keep rising. Key patents have been identified based on several indicators, including family size, legal status, citations analysis and impact on photoacoustic biomedical imaging technology. If industrial applicants are the main IP holder, academic applicants hold key patents and the importance of their portfolios is significant. In particular, the NIH and the University of Texas stand out as important actors as they own strong portfolios with key technologies.

The 900+ patent families selected for this study have been manually segmented by products and applications. Products include contrast agents and imaging devices, such as handheld probes or catheter including an imaging mean while the most targeted applications are the diagnosis and treatment of cancers and vascular pathologies. Photoacoustic imaging is a very promising technique for the medical domain and several imaging devices have been developed from patented technologies included in this patent landscape. Devices for pre-clinical research are already available on the market and medical devices are currently in clinical trials.

Many American, Japanese and Chinese assignees feature among the main patent applicants. Key players include academic and industrial actors. In term of filing activity, industrial applicants are getting the upper hand, especially Canon and Fujifilm. The report provides a ranking and analysis of the relative strength of the top patent holders derived from their portfolio size, patent citations networks, countries of patents filings, current legal status of patents. Through this thorough analysis, we have identified 15+ major players, each of which is profiled in this report. Each profile includes a detailed portfolio analysis with patent activities, key patents, impact of portfolio, granted patents near expiration and IP strategies.

The impact factor of patent portfolios and the IP blocking potential of the applicants have been analyzed. The most influent portfolios belong to US academic applicants. The portfolio of company Seno Medical Intr., who is also present on the market, has a significant impact as well.